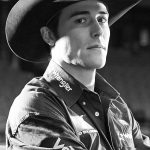 Bio: This Canadian cowboy started riding and attended his first rodeo school at 10 where he won a rodeo card after which he competed in 4 contests that year and was permanently hooked. To keep in shape he definitely hits the gym hard and also has a routine he does in his hotel room on the road that includes pushups, sit-ups, etc. After his wife Stacey, whom he married in April 2013, Zane’s best pal is his English bulldog Ace, whom he calls his mascot and sometimes travels with. When not on the tour, Zane likes snowboarding and doing renovations on his friend’s houses.  Someday he hopes to retire from bull riding with enough money to buy a big place in the country where he can raise a bunch of kids and of course, have a large wine cellar.