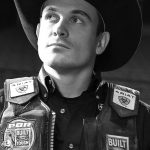 Bio: Matt started bull riding when he was 10, with help from his dad who used to ride bulls as well. He said although his grandfather was too tall to ride, he is still Matt’s biggest fan. When he’s not busy traveling the country entering in as many competitions that he can, he enjoys riding horses, hiking, feeding baby ducks at the park and playing basketball. You can find Matt hanging out with Ryan Dirteater, Douglas Duncan, Chase Outlaw, Sean Willingham and Gage Gay on tour. He also works out with Douglas year round doing hot yoga and visiting Michael Johnson Performance.