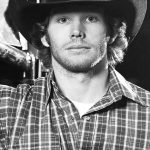 Bio: A former Texas High School Rodeo Association Champion, Harve rode his first bull at age 14 after watching a friend. He learned to ride from his father, Dee, who was a former bull rider and received further instruction from Murray and former PBR stars Adam and Gilbert Carrillo. When it comes time to relax, Harve might be found hanging with fellow PBR riders or maybe watching a comedic movie. If he weren’t a professional bull rider, Harve would have liked to be a football player. When he retires he will probably spend more time golfing and envisions himself owning a business of some sort.  “Anything where I can be my own boss.” says Harve.

Harve will be the featured cowboy on Tina Leonard’s cover of — Family For the Bull Rider — releasing April 21st!