SNEAK PEEK: Over The Line by K.C. Stewart

Over the Line
by K.C. Stewart

The truth is in the evidence. Follow your nose, keep an ear to the ground and don’t believe everything you hear. Tyson Cartwright has always known who he was and becoming the Adirondack Pack’s Enforcer was the goal from the very start. He loves his job, but not today. Someone in the pack isn’t who they say they are. It isn’t the first time and it won’t be the last that Tyson has to rid the pack of a spy. These are the people he calls his friends and family and one of them is lying to him. His gut has an idea but is it just because he doesn’t like the man his sister has taken up with or is there something more to Jack Naughton? For Jenny’s sake he better know for sure it’s Jack before dispensing justice because once a wolf goes over the line, there is no coming back.

There wasn’t much that could put that look on Owen’s face. In all their years together as quasi-brothers, best friends and pack mates, Tyson had only seen that particular look a handful of times and he knew there would be no time off for him in the foreseeable future. As pack enforcer it was Tyson’s job to find the reason for the look on his Alpha’s face and bring justice. He was protector, detective, judge and jury. His hands were bloodier than anyone else’s in the Adirondack Park and maybe even in the state of New York. Justice often meant death because once a wolf went over the line, there was no coming back.

Tyson could see the line. He knew where it stood and where those in his pack stood in relation to it. Being feared, and often times hated, was just one of the downfalls of the job. Neither of which bothered him.

Owen was alpha. He was the most dominate wolf in the pack and that meant he was the one they relied on. The one they turned to for help. The one who would protect them with everything he had. The pack was his family’s legacy but that didn’t mean it was his birthright, he was just right for the job. When someone was born to do something, nothing—not even being an outcast, could stop them from being who they were meant to be.

Tyson was meant to bring justice and protect the pack.

Owen was meant to lead.

“I can tell by your expression that you have good news for me,” Tyson strolled into Owen’s office and took one of the seats in front of the massive oak desk.

Owen glanced up from the newspaper he had spread out. Usually a remark like that would have gotten a rise out of him but Owen was too far lost in thought to do much more than show mild interest. Whatever it was had caused his best friend to suppress the man and allowed the alpha wolf to take charge.

“Just tell me,” he said this time.

A snarl was just barely being held back. “There was another one.” For a guy who usually spoke in low, soft tones he knew how to add venom when needed. Tyson reached across the desk and turned the newspaper around. Another body ravaged by animals. But it wasn’t just an animal that had torn and bit into the flesh of the dead man, it was one of them: a werewolf, shifter, lycanthrope. The killing was a message, just not one the human population could read. The message, like all the rest, was for them.

Humans are fodder. Nothing more, nothing less.

A radical group of wolf shifters who liked to call themselves “Canidae,” believed that between the two halves of the lycanthrope soul, the wolf is the stronger half and they should lean towards the way of the animal. Their kind had evolved. At one point, they had leaned heavily on the wolf side of their instincts but in the world as it was today, they relied on the human instead.

“Canidae?” he asked but only for confirmation.

“What do you think?”

That would be a yes. “What are you thinking, Owen? Obviously something if you called me in here.”

“I haven’t wanted to make waves with Canidae.”

“I know.” Everything Owen did, he did for the good of the pack. Keeping his head down in this debate may have been seen as submissive by some, but Tyson knew it had kept many of them alive.

“I’ve kept middle of the line even though I think they are a bunch of ass sniffing dogs who only want a reason to kill freely. This though,” he tapped the newspaper, “this is their way of telling me to pick a side. Three dead in the last month. We can’t have that. Many more and the police will start connecting the dots.”

Government intervention was the very last thing any of them wanted. The government knew about their kind, unlike the rest of the human population. They had yet to do any more than make idle threats. However, giving them bodies, gave them a reason to make nice on those threats.

“I think we have a mole. Someone is feeding Canidae leaders pack information. I’ve been talking to the White Mountain pack and they were having the same problems. Turns out, someone from their pack was in Canidae and they were slowly gathering followers. I don’t want to believe any of ours would go against me like that but…”

“Yeah, but.” Tyson saw just how honest and honorable wolves could be. He had no doubts that there were some in their pack that were capable of espionage and brutal human killings.

Owen folded up the paper and filed it in his desk, probably with all the other articles from the past year on animal killings and attacks. There was something else that was bothering him. Tyson saw anger and exhaustion in Owen’s face. Canidae was the cause behind the anger, but he never lost sleep over it.

His laugh was half sigh. “No. Lee’s on her kick again.”

“Jesus,” he groaned. “After almost two years you’d think she would get it through that thick doctor scull of hers that you love her.”

“You’d think,” he agreed. “I can’t really blame her though. I quell the gossip when I hear it but it always gets back to her.”

“Those old hags can go fuck themselves. So she can’t have kids. It’s not like it’s the end of the world.”

“No, just the end of my line.” He wasn’t bitter per say, but Tyson heard the accusation. They had been dancing around their mutual attraction ever since they were pups. Unable to have kids wasn’t a deal breaker for Owen but it was always there between them. They worked together as long as Lee couldn’t hear the gossip.

The clock in the corner of the room struck with three long, deep gongs. Both of them looked and waited for the sound to end. Tyson hated that clock. He needed to be going anyway. Jenny was expecting him soon. “What do you need of me?” He asked referring to the Canidae problem.

Owen looked him square in the face. “To do your job.” 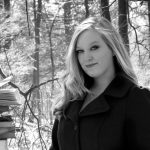 K.C. Stewart lives in central Pennsylvania with her three cats. She is currently attending college online for Library Science while working full time as a photographer. In her spare time, which isn’t easy to find, she reads an obnoxious amount and writes in between everything else. K.C. has a very real addiction to gummy bears and talking to her cats when no one is around.

You can find more about K.C. by following these links:

Readers Entertainmenthttp://dayagency.com
Previous articleSlipping Into a Thriller with Patricia Gussin’s Novel: After the Fall
Next articleBlack History Month Books for Readers of All Ages