Sun, moon and stars
The story behind a new seasonal quartet

For the past few months, I’ve been preoccupied by the Earth’s solstices and equinoxes.

It all started with a challenge to write a Christmas ghost story. Admittedly, this was nearly 20 years ago, but good ideas have no sell-by date.

Last winter, I was dog-walking and it was so unusually cold that lakes, ponds and even rivers had frozen over. It was fascinating to see how my usual haunts were transformed. So, instead of a Yuletide them, I decided to set a tale during the winter solstice – and indulge my inner druid.

A Walk in the Park is an Edwardian tale, featuring a ghostly encounter resulting from a fissure in time and place. The setting is real

enough, for it takes place Hesketh Park, a classic Victorian labyrinth of paths, promenades and pseudo-grottoes, greenhouses and a lake. I used to go there a great deal when I was growing up in Southport, and it was terrific fun making it scary. I actually gave myself nightmares! It’s free on Smashwords, as are the two sequels.

Spring came around and it was time for a sequel. The second story was inspired by a trip in early March when my husband took a day off and whisked me out to Hampton Lucy, a charming Warwickshire village dominated by a magnificent piece of ecclesiastical architecture … 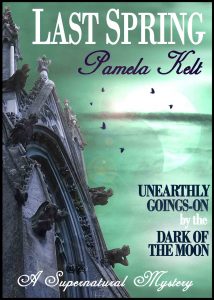 In the churchyard was a poignant gravestone and above, sinister gargoyles grimaced from on high … And so Last Spring evolved. The characters just seemed to be from the 1920s, so why not? It evolved into a post-war parable of the paranormal.

Summer solstice is a well-honoured tradition in many cultures, but the quintessential image for most is Stone Henge. However, last summer I had the good fortune to take a trip to see the ancient stones and monuments of Kilmartin Glen with my daughter, a History of Art student who has developed an

interest in the subject. Our favourite site was Temple Wood, an intriguing stone circle in a magical place even if your name doesn’t have Celtic origins. So, Midsummer Glen is title number three, an apocalyptic tale  of what could happen when ancient myths intersect with modern realities. Still in keeping with my penchant for historical fiction, the timeline has now moved into the 1930s – the June in 1939, to be precise, on the eve of the phoney war.

The main character is a tribute to my late father, who really did work as a hedge-cutter one vacation in Dumfriesshire. He studied geography, rather than geology, and lost a brother when he was very young. Some of the classical references in the story are also

real, but I have taken some mischievous liberties. My next and final task is to conclude with the fourth and final insta;lment for the autumnal equinox.

The only clue I can offer at present is that a parallel theme of the four elements runs through the stories. I’ve covered water, air and earth in that order in the first three. So, all that’s left is … fire.

About the Author:
Born in Edinburgh, I have two degrees in Spanish (Manchester and Oxford), specialising in 17th-century comic drama. I trained in journalism, including stints on provincial newspapers in Bath, Bristol, Cambridge and Lancashire as well as Western Australia. I moved into educational publishing and online editing including international publishers and Government agencies. I currently live in Warwickshire where I started to write full-time to avoid the ‘empty nest’ syndrome. My next big adventure is a move north to the Scottish borders.

My Favorite Dessert by Loren Rhoads A couple of years ago, I hit upon the perfect way to celebrate my birthday. A restaurant opened in...