Behind the Words: T.S. Pettibone

Behind the Words is a feature that gives readers insight to those who write the words. Today’s author(s) is T.S. Pettibone, the pseudonym for Brittany and Nicole Pettibone – twins sisters with a penchant for writing. 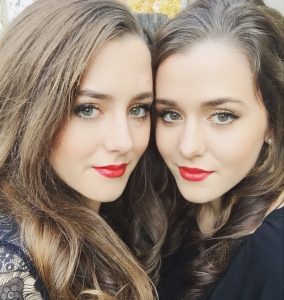 Our names are Brittany and Nicole Pettibone, and we’re identical twins who write under the pen name ‘T.S. Pettibone’. We were born in California. Although we’ve lived in the Bay Area most of our lives, we spent about half of our childhood in Kansas. And yes, unfortunately, we still have day jobs, but we’ve taken some time off to publish and promote Hatred Day. Like most authors, we hope to one day be lucky enough to write full-time. Fingers crossed!

We’ve been writing for about 11 years, 9 of which have been spent writing Hatred Day and planning the following books in the series. Our greatest teacher has been John Truby, a master of story structure, whose students went on to pen Scream, Shrek and Sleepless in Seattle. We’ve spent the last two years studying his methodology, and we’ve also attended two of his seminars in Los Angeles and one in San Francisco.

Writing as a team has worked extremely well for us. Generally, we each choose a POV and then edit each other’s work. If there is only one POV, one of us writes and the other edits and embellishes or adds to the writing when necessary. Rarely do we have creative differences, but when we do, they’re generally minor. For example, if we disagree on a certain plot point, we’ll go through our story’s structural arc step-by-step until we’ve determined if said plot point will ultimately be a positive or negative contribution to our story.

Hatred Day is a story about a girl named Snofrid, a member of an alien race trying to coexist with humans, set in a futuristic world that has been distorted and polluted by their arrival. Magic is a dominant force on Earth, and technology has advanced by half a century to when the story takes place, in the year 2052. The brutal war between humans and Snofrid’s alien kind, Inborns, has gone global. Thousands of Inborns are facing execution, including Snofrid’s family. To save them, Snofrid must volunteer herself as part of a hunt that will ultimately determine the outcome of an even greater impending war.

At one time, all of our characters were entirely fictitious. Over the past few years, we’ve incorporated the most fascinating traits from family members and people we know or have researched into our characters. In our experience, using traits from those around us makes for a more well-rounded and realistic character. 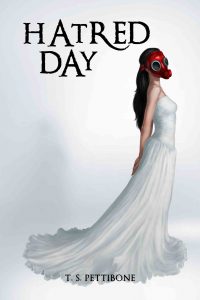 The idea didn’t come all at once. The story evolved over 9 years, through many different titles, plot points and characters. Only a few elements have remained consistent, including the basic premise, which was Brittany’s idea.

The characters Jazara and Rhode, who have ultimately become two of our favorite characters, did not appear in Hatred Day until the final draft.

We love Hadrian, but at times, writing him was like trying to force a stone through a cheese-grater. Even after writing him six different ways, he continued to throw off the dynamic of our character web. Character webs are tricky, and the wrong dynamic can cause a lot of damage to the story overall. It took about six years to get Hadrian right, and when we finally did, he went on to become one of the easiest and most enjoyable characters to write.

None of them. We think it would be a lot more fun to live for a day in the world we created, as well as have the chance to meet all of our characters.

We’re currently working on Verdict Day, book two in the Hatred Day Series. The world-building is a lot more involved, and the story has a much more complex plot and character web. But we’re having a blast with it. Expected publication is 2017.

Nicole would choose William Shakespeare because she’d love to become privy to his method of creating such extraordinary characters. Brittany would choose Fyodor Dostoevsky because, aside from being her favorite writer, his books were responsible for making her fall in love with reading.

Yes! We both illustrate and sing.

Brittany’s go to meal is yellow curry chicken from a local restaurant called House of Siam. Nicole is always up for steak, roast vegetables and salad

14. What is the one question you never get asked at interviews, but wish you did?

Oh, so many questions. But we’re going to go with, ‘What are the pros and cons of being a writer?’

Thank you so much for being our featured authors at Behind the Words. We wish you much success and hope you’ll visit us again.

Readers: follow this link to read an excerpt from Hatred Day.

You find out more about T.S. Pettibone and their upcoming books at: