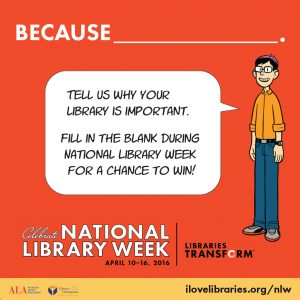 The American Library Association is celebrating National Library week with a splash of books, libraries and more. This year’s theme for the week is Libraries Transform! American libraries today are far more than just a book lender. They have become “places of creativity where people can meet to share a hobby, use a 3D printer, edit a video, or use software to record their own music. Libraries offer access to the tools, technology and training essential to the economic and cultural lives of their communities.”

The 2016 Honorary Chair for National Library Week is Gene Luen Yang. He is also the 2016-2017 National Ambassador for Young People’s Literature.  Yang’s book “American Born Chinese,” was the first graphic novel to be a finalist for a National Book Award and the first to win the American Library Association’s Printz Award. It also won an Eisner Award for Best Graphic Album.

To show your love and support for your library visit your library and promote it on social media. You can follow I Love Libraries on Facebook and Twitter. Make sure you use the hashtags#NLW16 and #LibrariesTransform to join the celebration on social media.  You can also help promote libraries by joining their Thunderclap campaign.

More from the ALA press release:
During National Library Week we’re asking you to create your own Because Statement. Just fill in the blank telling us why libraries matter to you or your community. One randomly selected winner will receive a $100 gift card and a copy of “Secret Coders,” by Mike Holmes and Gene Luen Yang, our National Library Week Honorary Chair.

Post to Twitter, Instagram, or on the I Love Libraries Facebook page during National Library Week for a chance to win. Your entry can be a picture or text. Creativity is encouraged. Just be sure to include the word “Because” and the hashtag #LibrariesTransform for a chance to win. Entries can also be submitted directly to the Libraries Transform website.