Book Trailer Feature: The House of Daniel by Harry Turtledove

Since the Big Bubble popped in 1929, life in the United States hasn’t been the same. Hotshot wizards will tell you nothing’s really changed, but then again, hotshot wizards aren’t looking for honest work in Enid, Oklahoma. No paying jobs at the mill, because zombies will work for nothing. The diner on Main Street is seeing hard times as well, because a lot fewer folks can afford to fly carpets in from miles away.
Then the House of Daniel comes to town—a brash band of barnstormers who’ll take on any team, and whose antics never fail to entertain. Against the odds Jack secures a berth with them. Now they’re off to tour an America that’s as shot through with magic as it is dead broke. Jack will never be the same—nor will baseball. Find out more at http://us.macmillan.com/thehouseofdan… Fantasy/paranormal 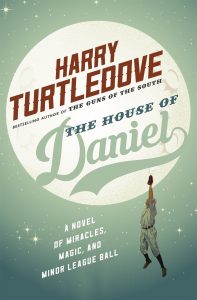