Behind The Words: Tracey Lyons 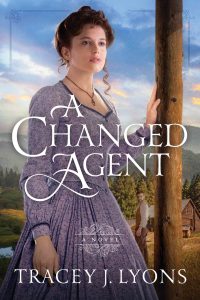 This week Behind the Words welcomes Amazon bestselling author, Tracey Lyons. Welcome Tracey, tell us a bit about yourself.

Where you’re from, where you live? I’m originally from upstate New York. Right now I live downstate near West Point.

Do you have one of those day-jobs? I don’t have a day job at the moment my writing career is taking up a lot of time. In the past I’ve done part-time work ranging from being an Outreach Work at Catholic Charities, secretary at the Shaker Museum and Library, to working as a reception in a Veterinary clinic.

How long have you been writing? My favorite question because I used to say twenty years, based on my oldest son’s age. I started writing when he was born. Well, he just turned thirty-three! So I’ve been writing over thirty years.

Briefly describe your writing day. I’m a morning writer. So I need caffeine which comes in the form of a cup of hot tea with milk, no sugar. I bring that to my desk, which is right outside my bedroom door! I find my creativity is best in the morning light. I use the afternoon to do marketing and research.

Tell us about your latest release? A Changed Agent is my first inspirational historical romance. And I’m with a new to me publisher, Waterfall Press which is part of Brilliance Publishing (subsidiary of Amazon Publishing), so I’ve very excited about the release!

Here’s a brief blurb: When schoolteacher Elsie Mitchell meets rugged William Benton on a train platform in Albany, it appears they have nothing in common. He isn’t the sort of fellow a proper young woman of the 1890s would ever speak to, much less become involved with. But when she arrives at her small town in the Adirondack Mountains, Elsie is offered a job as caregiver for this mysterious out-of-towner’s niece and nephew, who’ve been tragically orphaned. Heartbroken for them, she accepts.

Unknown to her, William is an undercover Pinkerton agent posing as a lumber-company foreman. He’s never wanted family—his work is too dangerous. Yet as Elsie transforms his house into a home and he spends time with the children, he feels drawn to family life—and to Elsie.

As a good Christian, Elsie is troubled by William’s secrets…though she does find him intriguing. And when a sinister figure from her past arrives, Elsie and William will have to trust in faith and newfound love to protect their unlikely family from danger.

Are your characters entirely fictitious or have you borrowed from real world people you know? For this particular book the characters are entirely fictitious, but in my three book Women of Surprise series, I based each of the three heroines on myself and my two sisters. I’m not sure my sisters were too happy with my portrayal of them. Mind you these were books set in the 1800’s so I did take creative license.

Would you share one detail from your current release with readers that they might not find in the book? The town of Heartston is completely fictional. And there might not have been a rail line that ran through that part of the Adirondack Mountains.

Who has been the most difficult character for you to write? (Any of your books) I think at one time or another all of my characters have had their moments when I wanted to pull my hair out. Some characters come really easy and others take a bit more time to figure out.

If you could be one of your characters for a day which character would it be? Oh my gosh, I loved Abigail Monroe from A Surprise for Abigail, Book One Women of Surprise. Why? She was so brave to take on the job of Sheriff. I mean how many female Sheriffs were there in the Catskill Mountains of New York State in the 1800’s? I loved writing her and developing her spunky personality.

What’s next? Right now I’m working on the next book in the series tentatively titled, The Heart of an Agent. This one will center around a female Pinkerton agent who has left that life behind and wants to help an embittered widower who is still suffering the loss of his wife and in doing so has let his business fall into decline. The heroine wants to help him bring his Great Camp back to life and in the process falls in love with him. I’m excited about this book because Adirondack Great Camps were a big part of New York State history.

All writers are readers. Are there any particular authors that have influenced how you write and, if so, how have they influenced you? Linda Lael Miller comes to mind. I love her work. She influenced me by giving me a sense of how really good western romance fiction should be written. Her books are rich in setting and character development. I hope that some of that has rubbed off on me even though my books are set in the east they are historicals with a western flair. And Debbie Macomber. Her books are rich in community and friendships. I like to write about small towns and through the years have read a lot of Debbie’s books.

If you could have dinner with any writer living or dead, who would it be and why? It would so hard to choose only one! But I’d have to say Stephen King because I’d like to find out how he sleeps with all those scary stories running around in his head.

If you could ask your favorite author a question what would it be? I’d ask Nora Roberts what she thinks about all of the changes in the publishing industry.

Do you have a secret talent readers would be surprised by? Yes. I can drive a fire truck, stick shift, tanker that hauls hundreds of gallons of water. Picture my five-foot tall frame climbing up into one of those big red trucks!

Your favorite go to drink or food when the world goes crazy! Vodka!

Thank you for joining us at Behind the Words…………..

You can purchase Tracey’s latest release A Changed Agent at:
Amazon