SNEAK PEEK:Between Us by Wendi Zwaduk 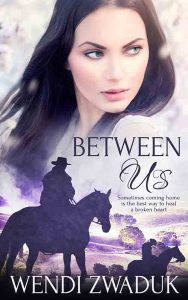 Between Us – Boots, Chaps and Cowboy Hats Anthology by Wendi Zwaduk

Channon Kennedy planned to come home, but she never expected to find herself in the arms of the two men she’s fantasized over since high school. Back then, Shaun and Brian didn’t seem interested. Now, she’s older, wiser and has nothing to lose. If the men of her dreams want her, who is she to resist?
Shaun Maple and Brian Powell have done everything together—work at the farm, live together and love the same woman. They’ve wanted Channon since they first laid eyes on her, but circumstances beyond their control kept the threesome apart. Times have changed and so have Shaun and Brian. They’re not taking no for an answer—they want her between them for good. Can the ranch hands convince her she’s the only woman for them or will the relationship implode before it gets a chance to grow?
EXCERPT:
“Where are a couple of farm boys when I need them?” Channon Kennedy brushed her horse, Peaches, and rested her head on the side of the large animal’s neck. She liked being around the horses. She could talk to them and not have to worry about someone arguing with her. She’d done enough arguing in the last year for a lifetime.
“I don’t know how I’m going to manage,” she said. She stopped brushing the horse and looked Peaches in the eye. “I’m one person with three horses and a hundred acres. That’s a lot for one person to keep things going.”
The horse snorted, then shook her head.
“I get it. We’ll figure it out.” She sighed and surveyed the stall. According to her father’s notes, there were two farm hands living on the property. She hadn’t seen anyone, but the state of the stall said otherwise. Someone had cleaned it out recently. She’d need to shovel out the muck and add fresh straw, but it could’ve been worse.
Not knowing who lived on the farm was her own fault. She’d been at the house for three days, but had only ventured out during the last hour. Between the guilt over not being home when her father died and mourning the loss of him, she hadn’t wanted to be out in public. She grieved for the end of her relationship with her former boyfriend, Jack, too. The bastard had cheated on her and dumped her for a younger woman. She shouldn’t have been so upset. Getting rid of him should’ve been a relief, but it wasn’t. Seven years was a long time to be with someone, only to be shafted.
Channon climbed the side of the stall and sat on the wooden planks. She leaned against the divider bars between the stables. “I miss the boys the most.” She gripped the shelf along the wall. “I could use their help, yeah, but I miss their friendship. Brian and Shaun were here when no one else cared.”
Peaches shifted around and bumped her head against Channon’s side. Channon hugged the horse. “I miss them. I shouldn’t because we’re horrible when we’re together. I still remember all the times we got into trouble, but it was fun.”

You can purchase Between Us at:
Totally Bound
Amazon

I’ve always dreamt of writing the stories in my head. Tall, dark, and handsome heroes are my favorites, as long as he has an independent woman keeping him in line. I love playing with words and letting the characters run wild.NASCAR, Ohio farmland, dirt racing, animals and second chance romance all feature prominently in my books. I also write under the pen name of Megan Slayer. I’m published with Total-E-Bound, Changeling Press, Liquid Silver Books, Turquoise Morning Press, Decadent Publishing and The Wild Rose Press. Come join me for this fantastic journey!
Find out more about Megan at:
http://wendizwaduk.com/
http://about.me/wendi_zwaduk
Share
Facebook
Twitter
Pinterest
Linkedin
ReddIt
Email
Print
Tumblr
Mix
VK
Digg

Readers Entertainmenthttp://dayagency.com
Previous articleCome Over to the Dark Side: Three Chilling Novels Told Through the Villain’s Eyes
Next articleSNEAK PEEK: Skin of Tattoos by Christina Hoag