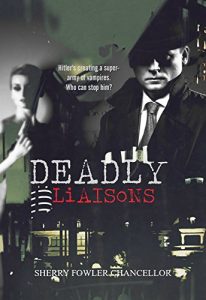 I’m Sherry Chancellor. I don’t like the word resolution as it always seems to set me up for failure so I prefer to say that I have goals for the year. Goals seem more flexible and pliable than resolutions. At least in my mind.

I write under two names and I’ve also made a goal to get out two books this year under each name.

My latest release is under Sherry Fowler Chancellor and it’s called Deadly Liaisons. It came out in December and is set in the time period before the second World War. It’s quite an adventure and is a lot of fun.

My alter ego, Jillian Chantal, will have a Regency story out January 31, 2017 called The Bachelor and the Dowager. And so, there ya go. One of the 4 books I want to come out this year will be out in the first month so I’m optimistic about the goal I’ve set for both Sherry and Jillian

As for personal goals, I plan to travel more this year as it inspires me. I didn’t get out and about in 2016 as much as I wanted. I hope to get to Germany to visit a friend who moved there in October.

It’s 1938. Europe is on the brink of war as the madman Adolph Hitler is amassing an army to conquer the continent. The Führer is also in negotiations with Ambrose Schumacher, leader of a vampire coven, to recruit super-soldier vampires to fight for Germany. If he’s successful, Europe is lost.

Declan Cavanagh, a member of a secret society of vampire hunters, is on a mission to stop this evil alliance.

In his pursuit, Declan will be faced with many choices—some hard and some easy—and one even heartbreaking, but he knows he must persevere in order to try to bring some normalcy to a world caught up in chaos.

And if, along the way, he gets distracted by a number of attractive women, well, it’s just part of the job…or is it?