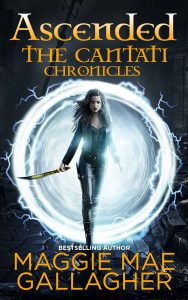 War. It’s here. The last war of mankind. The winner takes Earth as its prize.

My name is Alana Devereaux. I am an elite Cantati Forces Lieutenant from Earth’s desolate future. I was sent back through time to save your world. My mission to stop the Mutari faltered. Demons infiltrated our world when the walls between Earth and Infernus fell. Millions died in the first volleys.

The Mutari changed me on an elemental level and my new powers scare the bloody daylights out of me. Formorian Hunters are closing in on my trail with a singular goal, to enact the death warrant placed on my head by their Queen. Now I am running for my life, on a quest to discover a way to kill an immortal on a power trip, stuck between mortal enemies, and everyone else wants me dead.

Choices had consequences. Mine had.

What the hell was I? Human? Cantati? Demon?

I didn’t know. Not anymore. The game board of my life had been upended, and I was still trying to make sense of the scattered pieces.

Until yesterday, I believed I was the last of my kind. A Cantati warrior from the Earth’s desolate future sent eightythree years into the past to stop the Mutari. The Mutari happened every few thousand years. When it did, Earth aligned with six planets in our solar system, creating a seventy-twohour eclipse on Earth. It was also when the walls between the dimensions were at their most vulnerable and could be fully breached. While portals could be opened from time to time, they were marginal in size and couldn’t remain open for extended periods. At least, not long enough to allow an army to march through.

Drystan, lord of the dimension Infernus, had used a tiny amount of my blood. And by tiny, I mean drops that Gaelen’s bastard of a brother, Maddock, had stolen from me. Drystan used it to sever the walls between our worlds and give his armies free rein to invade our planet.

We were lucky. He didn’t have massive amounts of my blood. Which was why the human world’s existence limped on. Otherwise, we’d be hip-deep in Drystan’s demon soldiers. And I’d be dead, so it would be a moot point, for me at least.

Thousands still made it through the breeches before the energy of my lifeblood was exhausted. Which meant I failed my mission. When my father, general and commander of the Cantati Forces worldwide, sent me back through time, using a Moldevian orb and incantation devised by our Coven, my objective was to stop Drystan and keep the human race from fading into extinction.

The Mutari changed me, contorted my abilities into something new. I felt stronger, had a keener sense of the elements, and noticed that the barriers normally locking my magic ability in place had been blown off their hinges.

My supercharged abilities scared the bloody shit out of me.

A flick of my wrist, and the wind outside bellowed and roared. I shuddered at the writhing mass snaking within me. The flavor stained with the dark. It was why I had detested Cade. A part of me had known he could help unearth these latent feelings. Dig them up from the grave I sank them into as a child. Yet the Mutari resurrected them with the force of an atom bomb to my system.

It’s why I excelled at killing demons. Why I alone could find them better than anyone else in my squad, because I was drawn to them just as demons were inherently drawn to me. It made me wonder if they had used my inner demon to track me to the Densare Compound. Maybe I should have taken exile in the Desert. Then maybe my guys would still be alive.

Was I something to be feared? Something that needed to be killed?

You can purchase ASCENDED at:
Amazon
Nook
iBooks
Kobo

And if you like your romance with a bit of spice and kink be sure to check out Maggie Mae Gallagher writing as Anya Summers!

TO MASTER AND DEFEND, Book 2

SUBMIT TO ME, Book 7