SNEAK PEEK: A Reference to Murder by Kym Roberts And How A Barn Inspired The Book 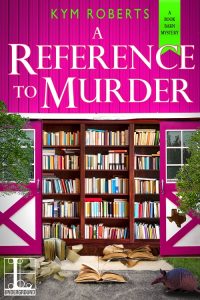 The Barn Doors are Open by Kym Roberts

What’s in a barn? Who knows! That’s what’s so great about them. They’re a piece of American history I’ve always found charming. My husband and I love to drive country roads and just look at the different barns—the older the better. We don’t stop and ask to walk through them—unless they’re having a barn sale;), but we have been known to stop and take a few pictures.

The picturesque setting captures the essence of hard work and serenity for us.  From the history behind the design, to the barnfinds inside, every structure has a unique story to tell about the people who built it, maintained it and the people who worked the land.  We admire the fortitude and the perseverance farmers and ranchers have shown through the generations.

Most people wouldn’t think my husband and I would gravitate toward country living—he grew up in the heart of Kansas City, and I grew up in the suburbs of various parts of the U.S. But my husband used to spend his summers at his aunt’s dairy farm in Holden, Missouri and he fell in love with the wide-open spaces. I think my love came when John Mellencamp opened up my social awareness to the plight of the American farmer with Farm Aid in the mid-eighties. A group of friends and I traveled to Chillicothe, Missouri to hear him perform a free concert—but what we learned from the speeches, has lasted a lifetime. 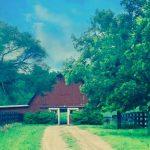 When it came time for me to write a new cozy, it only seemed natural to combine my love of reading and my appreciation for barns into one Book Barn Mystery series. I left the barn doors open—come and explore the history of Hazel Rock, Texas. Inspiration for The Book Barn in Kansas City, Missouri

A Reference to Murder…….

When kindergarten teacher Charli Rae Warren hightailed it out of Hazel Rock, Texas, as a teen, she vowed to leave her hometown in the dust. A decade later, she’s braving the frontier of big hair and bigger gossip once again . . . but this time, she’s saddled with murder!

Charli agrees to sell off the family bookstore, housed in a barn, and settle her estranged dad’s debt—if only so she can ride into the sunset and cut ties with Hazel Rock forever. But the trip is extended when Charli finds her realtor dead in the store, strangled by a bedazzled belt. And with daddy suspiciously MIA, father and daughter are topping the most wanted list . . .

Forging an unlikely alliance with the town beauty queen, the old beau who tore her family apart, and one ugly armadillo, Charli’s intent on protecting what’s left of her past . . . and wrangling the lone killer who’s fixin’ to destroy her future . . .
You can purchase A REFERENCE TO MURDER at:

Kobo:
https://www.kobo.com/us/en/ebook/a-reference-to-murder
About The Author: 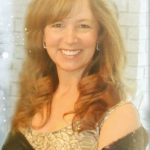 Three career paths resonated for Kym during her early childhood: a detective, an investigative reporter, and…a nun. Being a nun, however, dropped by the wayside when she became aware of boys–they were the spice of life she couldn’t deny.

In high school her path was forged when she took her first job at a dry cleaners and met every cop in town, especially the lone female police officer in patrol. From that point on there was no stopping Kym’s pursuit of a career in law enforcement.

Kym followed her dream and became a detective that fulfilled her desire to be an investigative reporter, with one extra perk–a badge. Promoted to sergeant Kym spent the majority of her career in SVU. She retired from the job reluctantly when her husband drug her kicking and screaming to another state, but writing continued to call her name.