SNEAK PEEK: Magick & Mayhem by Sharon Pape and How to Play the Name Game 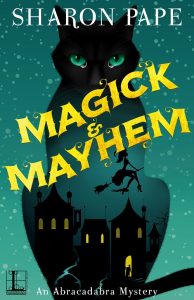 Names can be a lot more trouble than you might think–at least they are for me. The name I choose has to fit the image of the character in my mind and not just physically. It has to fit his or her personality and background as well. Without the right names for my characters, I am simply unable to write. I’ve tried using temporary names, blanks, Xs to hold the spaces, none of that works. Unlike Shakespeare’s Juliet, for me names are not interchangeable.

When I was developing the characters for the Abracadabra series, I needed old English names. Bronwen and Morgana were easy enough. For Morgana’s sister I wanted to use Matilda, but its origins are Gothic. I checked to see when it came into use in England and was pleasantly surprised to find a royal by that name in the twelfth century. Okay, it was time for the name of my protagonist. Nothing seemed right. What about a name I’d loved for years, but never had the chance to use? How much would it matter if my heroine didn’t have a real old English name? Seriously? I chided myself. Was I going to cave that easily? For the heck of it, I decided to look up the name’s origin and was amazed to find it was old English! She was meant to be Kailyn after all!

I’ve also come upon other name problems. Sometimes I choose a name that seems perfectly fine, only to discover halfway through the book that it won’t work. In Abracadabra I named a central character Bill, but the name came up too often next to the word kill, which sounded like I was referencing the movie Kill Bill. So I changed his name to Glen. That worked until I had the locals referring to the real town of Watkins Glen as the Glen. Back to the drawing board! I went through a couple of other names before I finally settled on Jim. Thankfully Jim was a keeper.

A long time ago, when I was working with another writer on a project, we chose a fairly common last name for a family— Bates. Unfortunately, when talking about the young boy in the family, a servant innocently used the proper title of “master.” We laughed long and hard over that one. After we recovered, we changed the family’s name.

Twenty-something Kailyn Wilde has learned to embrace her unpredictable life as a descendant of small-town New Camel’s most magickal family. She just didn’t expect to inherit her mother and grandmother’s centuries-old shop, Abracadabra, so suddenly. The surprises keep coming when Kailyn goes to finalize the estate at the local attorney’s office—and stumbles over the body of her best friend Elise’s husband . . .

As a brash detective casts the blame on Elise, Kailyn summons her deepest powers to find answers and start an investigation of her own. What with running a business, perfecting ancient spells, and keeping up with an uninvited guest of fabled origins, Kailyn has her hands full. But with the help of her uncanny black cat Sashkatu and her muumuu-clad Aunt Tilly, she’s closing in on a killer—who will do anything to make sure she never tests her supernatural skills again!

You can purchase Magick & Mayhem (book one, Abracadabra mystery series) at:
http://www.kensingtonbooks.com/book.aspx/34819 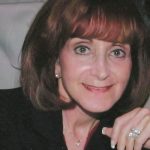 Sharon describes her writing career as having two stages. Back in the dark ages, before computers were in every household, she had three paranormal books published. The first one was condensed by Redbook Magazine, the first paperback original they had ever condensed. She has just re-released that book under the title FOR EVERYTHING A SEASON.

Then life brought her an unexpected challenge, by the name of breast cancer. After treatment she became a volunteer for the American Cancer Society’s Reach to Recovery Program and went on to be the program’s coordinator for Nassau and Suffolk Counties on Long Island. Several years later, with the help of her surgical oncologist and two other survivors, she started a not-for-profit organization to provide information and peer support to newly diagnosed breast cancer patients. Once the organization didn’t require as much of her time, she returned to her first love – writing. During this second stage of her career, she’s been writing cozy mysteries with a paranormal twist. Her first series was A Portrait of Crime Mysteries and the second was The Crystal Shop Mysteries. Her new series is the Abracadabra Mysteries. Magick & Mayhem, the first book in that series, debuts on May 2nd.