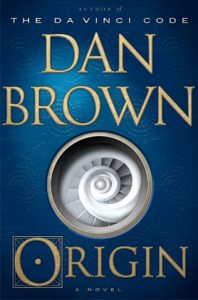 The author who constantly creates fictional antagonism between science and creationism is back with a new book — ORIGIN. Dan Brown brings back his quiet, yet resourceful and diligent character Professor Langdon.

Following much anticipation about the jacket, location, and content of this eagerly awaited new thriller by global publishing phenomenon Dan Brown, Doubleday will release the North American jacket of ORIGIN and themes from the book today at 9:30 AM EST. Since the September 2016 announcement of the publication, excitement for the release of the new novel featuring Brown’s unforgettable protagonist, Harvard symbologist Robert Langdon, has had fans clamoring for more information.

Now for the first time, readers worldwide will discover the setting for the action as well as key elements in the forthcoming thriller. Unfolding entirely in Spain—Madrid, Barcelona, Seville, and Bilbao, the home of the Guggenheim Museum—ORIGIN thrusts Langdon into the intersection of two of humankind’s most enduring questions: Where do we come from? Where are we going?

In keeping with his trademark style, Brown interweaves codes, symbols, science, religion, history, art, and architecture with a decidedly fresh twist; the art is modern and the science taps into the coolest cutting-edge technology available today. Doubleday will release this stunningly inventive new novel from the world’s most popular thriller writer in the U.S. and Canada on October 3, 2017; it will also be available as an ebook and an audiobook from Penguin Random House Audio.

ORIGIN will be published simultaneously in the U.K. by Transworld Publishers, a division of Penguin Random House. Additionally, a U.S. Spanish-language edition will be published by Vintage Espanol. There are more than 200 million copies of Dan Brown’s books in print worldwide, and his novels have been translated into 56 languages. Dan Brown is the author of numerous #1 international bestsellers, including The Da Vinci Code, Inferno, The Lost Symbol, Angels & Demons, Deception Point, and Digital Fortress.

Readers Entertainmenthttp://dayagency.com
Previous articleSNEAK PEEK: WHERE DO I START? by Chase Taylor Hackett and Getting Hit Over the Head with Ideas
Next articleThe Making of John Lennon’s IMAGINE From Yoko Ono