SNEAK PEEK: WHERE DO I START? by Chase Taylor Hackett and Getting Hit Over the Head with Ideas 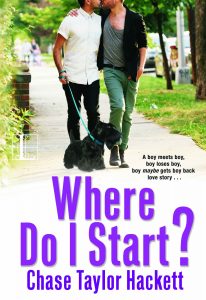 I was thrilled to be invited to write something as a Guest Blogger for Reader’s Entertainment Magazine. I positively basked in the glow of that for a good two minutes at least before I was clobbered in the back of the head by the reality: Write What?

Where’d You Get Your Ideas?

I’m sure I heard one of you ask me that, didn’t you? So here goes: The Origin Story. Every word of which is the godshonest truth, I swear.

One afternoon, there I was, walking down the street, minding my own business, when out of nowhere—kerpow!—I was suddenly struck by lightning. And when I woke up, I had lost my sight, but I was cool with that, because I realized I had this terrific idea for a book.

Okay, okay, maybe it wasn’t exactly like that, although what really happened wasn’t that far off.

I had had sort of a tossy-turny night, and as I lay in bed the next morning, I realized I had two guys in my head about whom I knew a whole bunch of stuff. Which was weird.

See, I had never written a novel, nor had I any plans to write one when I’d gone to bed that night. Until then my entire writing career had been in musical theatre. But when I woke up, holy cow, there they were, these two guys. And a snarky best friend. And a dog, for heaven’s sake. It was getting crowded in there! And I was pretty sure of one thing: These guys did not want to be a musical.

And they were talking.

After a life-long habit of writing, I knew I needed to start writing that stuff down before it was gone.

Looking back at my notes from that first day, it’s amazing how much I had. I knew these guys (Fletch and Roger), their history (a busted couple), where they lived (Brooklyn/Chelsea). I knew that Fletch was tall and blond, and working as an usher at the Broadway production of Wicked; and Roger was a young lawyer who played second violin in an amateur string quartet.

Because really!!! What was I supposed to do with that?

But there it was, and try as I might to talk him out of it, he wasn’t budging. Eventually I found that Roger’s quiet passion for music was really fun to write. It also made my hero stand out from everybody else’s. Mine played violin!

A couple other things I had: I knew that their time together as a couple had ended badly. I knew that both considered themselves totally over it. And both of them were, of course, crazy wrong. And I knew the book was going to be funny.

Terrific set-up, the thing should write itself, right? Unfortunately, I knew absolutely nothing about writing fiction. Zip. Zilch. Nada. As in nada damn thing. I didn’t have a clue how to begin.  So naturally enough, I called my book:

Where Do I Start?

I have read a lot of authors talking about doing gobs and gobs of research, immersing themselves in the world of their characters, mastering the rich details of the novel’s environment, etc.

I’m not one of those guys.

Just so you know, I am absolutely the laziest person you’ve ever met. I kept my story as close to home as I could, without it actually being autobiographical. Know why? You guessed it. No research. The book and the entire series are set in New York, and—how fortuitous!—I just happen to live there. Here, I mean. In New York. For research, I can just look out the window and wow! There it is.

I also make it a habit to steal pretty liberally from everyone around me. I had a friend living in a not-exactly-legal apartment in Brooklyn with a deranged landlady—too good to pass up. I heard an hysterical story about a guy who was crushing on a Starbucks barista and there was no way I was going to let that one go to waste. And I once turned up at a friend’s apartment with my perfectly-behaved terrier, only to discover that my friend’s cat was maybe not so well-mannered—and you can find a detailed description of what followed in Chapter 31.

There’s a scene at the top of that movie where Kathleen Turner is sitting at her typewriter, armed with white wine and a box of tissues, tearfully finishing up her romance novel, and sobbing. I laughed myself silly at that when I saw the movie. It’s perfectly ridiculous—and so me.

Staring at a monitor, rattling away on the keyboard, every emotion that passed though the characters passed through me. In spades. Unfortunately I did a lot of my work at my day job, while no one was looking. At least I hope no one was looking. Because there are a couple spots in this book—the final page is just one—that left me a mess, wiping away tears on my sleeve while typing away. And the book is a comedy!

And it wasn’t just while writing that first draft. Every time I read through, every single time, I’d get to one of those spots, and boo-hoo city.

Fortunately, writing this quick update for you today has been a happier, no-tears experience. Thank you for asking me.

Where Do I Start? by Chase Taylor Hackett |
Why You? (New Series)

Fletcher Andrews never believed in promises, or relationships, or love. He believed in hormones. If you’re tall, blond and gorgeous, New York City is one big testosterone-buffet of hot young actors, models, dancers.

After a chance meeting at Lincoln Center two years later, Fletch’s whole system of beliefs and dis-beliefs is shattered.

See, just because you don’t believe in love, doesn’t mean it isn’t real. It just means you don’t see it coming until it’s way too late.

YOU CAN PURCHASE WHERE DO I START? at:
Kensington Books

ABOUT THE AUTHOR:
Chase Taylor Hackett was raised on a farm in the Midwest—far from his current home in New York City. He has written most of his professional life, nearly all of it in musical theatre, culminating in a show opening on Broadway. Unfortunately, two weeks later that show closed on Broadway.

Not long ago, he woke up one morning with a couple characters in his head, who, try as he might to convince them, refused to become a musical comedy. He wondered if he could possibly work them up into a novel, but, never having tried to write one before, he didn’t have a clue where to begin.

And thus: Where Do I Start?

His second novel is And the Next Thing You Know… That book is scheduled for release in February 2018.

He lives in upper Manhattan with his partner Travis, and a Scottish terrier named Watson.