SNEAK PEEK: CRAZY IN LOVE by Crystal B. Bright and a Little Musical Influence 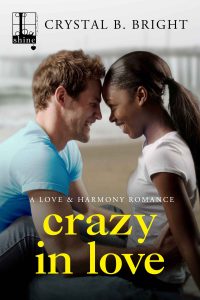 CRAZY IN LOVE by Crystal B. Bright
Series: A Love & Harmony Romance

Thank you to Reader Entertainment Magazine for this incredible opportunity to talk about the first book in my Love and Harmony series called Crazy In Love. You have the Beyoncé song in your head now, don’t you? You may even be shaking your booty like she did in her video. To be honest, the idea of the book came from, not the song itself, but from Queen Bey in a way.

At the time I started this story, Beyoncé had decided to go solo, which, in itself, is crazy enough that she left the wildly popular girl group, Destiny’s Child. However, that wasn’t the aspect of her life that interested me. Rumors had started swirling that she had started dating the rapper Jay-Z. Yes, this is how long ago I had started this story.

I didn’t understand how someone so gorgeous like Beyoncé would find anything attractive about Jay-Z, no offense to anyone who finds him appealing. As with most writers, I write stories to figure things out. I create a scenario and come up with my own plausible solution. So I wanted to write a story about an R&B artist who falls for a rapper, and what it is that brings the two of them together and keeps them together.

At the time I had started writing the story, I already had three books out with a different publisher, and all three books contained interracial romances. To stay on brand, I decided to change my story from an R&B singer and a rapper to an R&B singer and a white male singer. I didn’t want to make him like Justin Timberlake or (for those from my era) Jon B., a blue-eyed soul singer and have the two of them fit well together. I wanted to create a couple that seemingly wouldn’t fit, wouldn’t have anything in common, and maybe a couple most haven’t seen in the industry today. I changed the dynamic to an R&B singer and a country singer.

When I write, I always envision real singers, actors, and entertainers in my head. For the R&B singer, I pictured, of course, Beyoncé. She is the reason I started the book in the first place. It’s only fitting that she be the muse for my heroine. For the country singer, I pictured Tim McGraw. I saw him then as I see him now as sexy, raw, honest, and trustworthy. It’s the trustworthy part that made me name the hero in my book Truman Woodley.

Now that I had the characters down, I needed to create a scenario. Again, and this is dating myself, I drew from real-life situations. Also around the time Beyoncé and Jay-Z were merely dating then, Mariah Carey had suffered her public mental breakdown. Years before that, singer Toni Braxton had to file for bankruptcy when she lost everything by her spending habits and from relying on unscrupulous people in her life. I drew on those situations to create the heroine Chantel Evans, aka Shauna Stellar.

I wanted the heroine to have Beyoncé’s beauty, drive and talent. As most people know, Beyoncé started her career at a very early age, which included training from her father to learn to run in stilettos while singing. So I wanted my character to be young, but to have been in the business for a while.

Then I wanted her to suffer some great loss in her life that would force her to have a breakdown where she, seemingly, couldn’t come back from, especially after admitting herself into a facility for treatment. Then I want her to have no financial means to take care of herself. I wanted her to start from rock bottom. This would give my character somewhat of an even playing field as the hero, a struggling country singer who is trying to make it in the business to take care of his son.

In the end, I created this world at Charisma Music studio where a down-and-out R&B singer has to help record an album with a country singer and his band. My hope is that readers will read my book and will believe a scenario like this can happen, and that they’ll want to see something like this in real life.

I cannot wait for the other books in this Love and Harmony series to be released from my publisher, Lyrical Press. The second book in the series, Love Like Crazy, will focus on a student/janitor/waitress with an incredible voice and a recently fired music talent executive looking to revive his career with the next big thing in music. The third book in the series, Crazy On You, is about an R&B singer/songwriter only known for singing the sexy hook in the current song of the summer and a country singer with a wide, Justin Bieber type of appeal who have to work together to create music.

I’m hoping readers will feel the love and harmony throughout these stories. Thank you, again, Reader Entertainment Magazine, for this wonderful opportunity. If readers want to learn more about me and my other books, please go to www.CrystalBrightWriter.com. 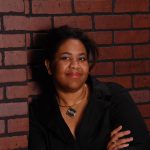 Crystal Bright graduated with a B.A. from Old Dominion University with a major in Creative Writing, a minor in Communications, and an emphasis on Public Relations. She earned her M.A. from Seton Hill University in Writing Popular Fiction. She is a member of Romance Writers of America and Chesapeake Romance Writers.

Readers Entertainmenthttp://dayagency.com
Previous articleRecord Ticket Sales for NY ComicCon 2017
Next articleSNEAK PEEK: WHERE DO I START? by Chase Taylor Hackett and Getting Hit Over the Head with Ideas