First Book from Inside the Trump White House: ‘Fire and Fury’ by Michael Wolff 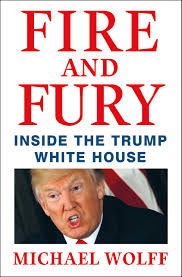 (From Macmillian Publishing Press Release)
Henry Holt will publish on Jan.9, 2018, the first inside account of the most controversial presidency in U.S. history with “Fire and Fury: Inside the Trump White House,” by Michael Wolff, the best-selling author, columnist and media critic, it was announced today by Stephen Rubin, Holt’s president and publisher. John Sterling, editor at large for Macmillan, will edit the book.

Given extraordinary access to Donald Trump’s administration, Wolff offers a shocking fly-on-the-wall view of the people and inner workings of the West Wing. Based on more than 200 interviews with the president, most members of his senior staff, and many of the people they in turn spoke to, Wolff shows how Trump and his team careened from one crisis to the next during the administration’s first nine months.

Many of Trump’s closest advisers were politically inexperienced and untested; from the start, bitter rivalries if not open warfare paralyzed the new presidency. And at the center of the White House was Trump himself: impulsive, fiery, and wholly new to the world of politics, he consistently broke the mold of presidential character, purpose, and precedent. “The United States is in the midst of the most intense political storm since Watergate, and my aim in reporting and writing this book was to see life inside White House through the eyes of the people who are closest to the center of this hurricane,” said Wolff. “Perhaps not since the Tudors has palace intrigue been so corrosive and lethal, nor the king so volatile and so in need of instant gratification.”

“Fire and Fury” casts a white-hot light on a president who made it possible for his family to take over “the people’s house,” even as other members of Trump’s inner circle tried to govern while serving their unpredictable and often vituperative boss. The book provides searing, intimate portraits of the key players, including: Steve Bannon, the president’s bellicose former chief strategist; Jared Kushner and Ivanka Trump (a.k.a. “Jarvanka”); Reince Priebus, the outflanked former chief of staff; Sean Spicer, the much-maligned former press secretary; and key operatives Kellyanne Conway, Gary Cohn, Stephen Miller, Dina Powell, and Hope Hicks. These and other advisers—and, of course, Trump himself—engaged in a daily clash as nasty and chaotic as has ever taken place in the West Wing.

From the stunning and completely unexpected election victory in November 2016 to Steve Bannon’s abrupt departure in August2017, “Fire and Fury” tells the behind-the-scenes story of a presidency in turmoil and an institution under attack from within.

Wolff has received numerous awards for his work, including two National Magazine Awards. He has been a regular columnist for “Vanity Fair,” “New York” magazine, “The Hollywood Reporter,” British “GQ,” “USA Today,” and “The Guardian.” He is the author of six prior books, including the bestselling “Burn Rate” and “The Man Who Owns the News.”

He lives in Manhattan. Rubin acquired North American rights to the book from Andrew Wylie of The Wylie Agency, LLC, in New York and London.