The Andrew Carnegie Medals for Excellence 2018 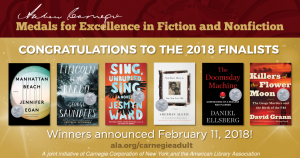 Andrew Carnegie Medals for Excellence in Fiction and Nonfiction 2018 Finalists

The two medal winners will be announced at the Reference and User Services Association’s Book and Media Awards event, sponsored by NoveList, at American Library Association Midwinter Meeting in Denver on Sunday, Feb. 11, 5 -7 p.m. From New York mobsters to the first woman diver at the Brooklyn Naval Station during WWII to the archetypally motley crew of a merchant-marine ship in U-boat-infested waters, Egan’s insightful and propulsive saga portrays complex and intriguing individuals navigating the rising tides of war. Saunders’ boldly imagined, exquisitely sensitive, and sharply funny historical and metaphysical drama pivots on President Lincoln’s grief over the death of his young son, Willie, as the cemetery’s dead tell their stories in a wild and wily improvisation on the afterlife. In telling the story of a Mississippi family––brother and sister Jojo and Kayla and their troubled mother, Leonie, and their legacy of grief and spiritual gifts, Ward explores unresolved racial tensions and the many ways humans create cruelty and suffering. A novel that is, at once, down-to-earth and magical.

Sherman Alexie
You Don’t Have to Say You Love Me: A Memoir
(Little, Brown) Alexie presents a courageous, enlightening, anguished, and funny memoir told in prose and poetry that pays tribute to his Spokane Indian mother and reveals many complex traumas and tragedies of reservation life, as well as his own struggles. In a gripping mix of memoir and exposé, Ellsberg recounts with searing specificity long-hidden facts about the U.S. government’s perilously inadequate control of nuclear weapons—an arsenal that endangers all life on Earth—and calls for the dismantling of this Doomsday Machine.

David Grann
Killers of the Flower Moon: The Osage Murders and the Birth of the FBI
(Doubleday) Grann’s true-crime history takes readers to early-1920s Oklahoma, where oil was discovered beneath the Osage territory and where members of the Osage Indian Nation were murdered, a riveting story that includes the accruing of power by J. Edgar Hoover and the FBI.