SNEAK PEEK: A Dungeon, A Vampire, and An Infatuation from C.C. Dragon 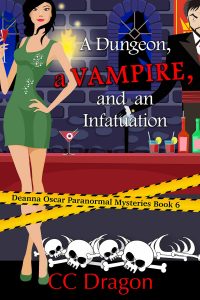 A Dungeon, A Vampire, and An Infatuation from C.C. Dragon
A Deanna Oscar Paranormal Mystery #6

From C.C. Dragon: Book 6… whoohooo!!! Thanks to everyone who has read or will give Deanna Oscar’ series a try. Paranormal cozy mysteries are super fun. I can’t believe I made it to book 6. I have plans for books 7 & 8 already so check out the others!!

Who can have a personal life when an infatuated and possibly demon-infested man is luring a dear friend to the dark side? Deanna has to try but she does have a team of angels on her side to help!

Problems with a creepy little church that belongs in the 1800s converge with an evil bar that keeps changing hands and names, but the darkness never fades. The vamps need to go!

Mary Lou is out to prove her independence, or is she rebelling when she plays with the bad boys? A crazy ex and a murder hit way too close to home and have the gang spinning in different directions.

Everyone is off their game and looking to establish their own alibis while chasing down all the bad guys and uncovering the murderer. Just another tale of Deanna Oscar and group of misfits out to fight evil and save the innocent people of New Orleans.

We were gathered around our usual table at the back of the Long and Big Easy. Ivy was managing and Brody was onstage.

“It’s new to New Orleans. It seems like the group has been together for a while. Very close. Very wary of strangers. They seemed nice at the Sunday service but if you inquire about volunteering or something more—they sort of close ranks a bit. They claim they have enough.” Greg frowned.

“Sounds sketchy.” I sipped my water. “Who moves a church around?”

Paul smirked at me. “You really were raised strictly Catholic.”

I shrugged. “Sorry, it’s my norm. If churches aren’t reliable, what can you rely on?”

“It could be as simple as they lost their lease. The owners decided to sell the building. Or if they were trouble. Not everyone owns their church property,” Greg replied.

“Who trusts some pop-up church?” I looked over the research on Greg’s tablet. “I swear this looks like Dr. Quinn, Medicine Woman without the nice hair and makeup.”

“Not quite Victorian but Little House on the Prairie. I agree,” Paul said.

Greg nodded. “It’s old school but look at the world today. Shootings and hackers. People have no sense of right and wrong anymore. They only care about themselves. If they are offended, someone else must pay. The Bible is full of prophecies coming true if you look at the world.”

“You’re freaking me out, Greg. Do I need to start stocking water and non-perishable food?” I teased.

Greg didn’t laugh. “The antichrist, the four horsemen, the seals.”

I shared a look with Paul.

“If you look at history, many times people thought it was the end of times. When the black death spread all over Europe. A plague of that magnitude, who can blame them? The world wars. Maybe people thought Hitler was the antichrist figure.” Paul sounded so rational and calm.

Which was good because I wanted to tell Greg he was sounding nuts. “It’s one wacky church. I’m all for live and let live, but if they are hurting people or violating the rights of women and children and calling it a religion—nope.”

“Sure. So do people. That’s why we’re investigating. I’m not rushing to shut them down. I’m also not jumping to Armageddon because a lot of people have crap attitudes and the news exploits every incident to the fullest. It wasn’t like this when we were little. God, now I sound old.” I grabbed some snack mix from the bowl.

Paul smiled. “Not old. You’re right. Our communication abilities are magnified exponentially. Everyone has a computer in their hand that can take video, share information, and search for anything in the world. That smart phone can be used for good or evil. I have a colleague who is doing a study to quantify if bullying really is worse than say, in the eighties.”

“Statistics would support bullying is a much bigger problem,” Greg said.

“Or can you just prove it? I was teased and bullied for being weird,” I defended.

“Exactly.” Paul pointed at me. “Phones can record conversation, video, and so on. Social media makes it possible to bully someone 24/7 and to document the bullying. Before, it was simply one person’s word against another’s.”

“I’ll be interested to see the results of the study,” Greg said.

His eyes were on the door. I turned and saw Mary Lou, Matt, and Gunnar walk in. Matt had gone to Lance’s apartment to try to reason with his brother. I hadn’t realized Mary Lou had gone along.

Gunnar came over as Matt and Mary Lou both went for the bar.

“Everything okay?” I asked.

“No. Lance doesn’t lose well. He wants nothing to change and Matt can’t even reason with him. John has tried but to Lance, John has everything—new bride, great career and a lot of money. Lance is losing everything.” Gunnar sat next to me. “We managed to get them to agree to arbitration. It’d be faster than court but I think Lance will just use it to drag things out and make Mary Lou miserable.”

I had no clue what was easier, court or arbitration. Divorce was an ugly and painful business.

“Sorry you had to go along for that. At least Matt had someone sane and calm on his side.” I patted Gunnar’s shoulder.

Greg was already up and over with Mary Lou talking.

I shot him a look. “Greg is a grownup. If he didn’t want to be with Mary Lou, he could walk away.”

“Maybe he feels guilty? I heard about their affair from Lance.” Gunnar rubbed his forehead. “Cheating cuts deep.”

I nodded. “I’m not defending them or what they did but, Lance was hardly a good husband. I just hope they find a way to split up and be done with it.”

“I can hope. Pray. Encourage.” I refused to give into the doom and gloom as I clinked my nails on the glass tabletop.

Paul nodded behind me. I looked up at the entrance to the club. Lance had followed his ex-wife back here.

“I’ll toss him out.” Gunnar stood.

Our bouncer was already following Lance. As soon as he realized security was onto him, Lance started shouting.

You can purchase A Dungeon, A Vampire, and An Infatuation at:

About the Author:
A loyal Chicago girl who loves deep dish pizza, the Cubs, and The Lake, CC Dragon is fascinated by the metaphysical and paranormal. She loves creating characters, especially amateur sleuths who solve mysteries or angsty sweet romances. A coffee and chocolate addict who loves fast cars, she’s still looking for a hero who likes to cook and clean…so she can write more!

WHEN WINTER COMES BY DANIEL WILLCOCKS Episode Six APOCALYPTIC HORROR AT ITS BEST  The forest is quaking, the storm closes in, an ancient darkness is awakened… The endgame...
Read more