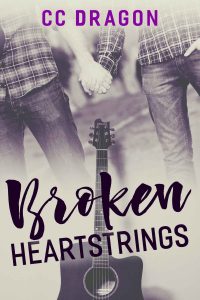 When the Writing Doesn’t Fit
by C.C. Dragon

The muse is a weird thing…normally as CC Dragon I only write cozy mysteries and usually paranormal ones. But this sweet mm romance doesn’t fit my Cheryl Dragon pen name either. I debated publishing it and even finishing it for a long time. The muse always wins…but it might not fit with what I normally write so check out the blurb and the excerpt. It’s a sweet gay romance and angsty.

I couldn’t get this idea out of my head. I think it was that extreme right church group that protested funerals and such things…it bugged me. That’s just not ‘Christian’…and I don’t usually get into religion. But I was raised Catholic and let me tell you, in-laws or cousins—you don’t turn your back on family. Gay or straight…whatever. That’s just not the right thing.

So, seeing “Christians” acting in such a non-Christian way stuck with me and bugged the crap out of me. Hate is a horrible example we see far too much of all over the media. Religion shouldn’t have hate in it. This book isn’t heavy on any one religious message. It’s about a family that had some tragedies and then one member comes out later in life—and how they deal with the information. My muse had a lot to say about that, whether that person is in the spotlight or not isn’t really the point. It’s a second chance romance that’s sweet and very much about family…

True love hurts. Jeff and Ben had it and lost it over a decade ago…

When Jeff is outed and attacked, the country music super star has to face his family and his choices under huge public scrutiny.

Jeff and Ben, his former producer, had a plan to come out and deal with the haters back in the day. Then tragedy struck Jeff’s family and changed everything—except the feelings. Jeff stayed in the closet and Ben walked away.

In the wake of the outing and press, Ben walks back. But why?

Or maybe for a second chance…

All he could think or feel was blinding pain as he squinted against the harsh light. Opening his eyes alone was a struggle. The pounding in his head was tremendous but his entire body throbbed and ached.

“He’s awake. Do you know your name?” asked a woman loudly.

“Yeah. What happened?” He tried to sit up but the sharp pains in his chest made him stop.

“Please don’t move. We’re getting the results of the X-rays and CAT scan back now. You had a bad blow to your head. Looks like multiple broken ribs. What’s your name?” The woman shone a light in his eyes and added more pain to the mix.

“What? Did they get my wallet? Was it a car accident?” he asked.

She finally stopped assessing him and looked him in the eye like a person. The brunette had her hair pulled back in a tight ponytail. “You don’t remember? You probably have a concussion. We need to see how badly you’ve been affected.”

He heard the familiar click of a camera shutter and put a hand up. It hurt, but the press seeing him like this wouldn’t be good either. A reporter had invaded his little ER room.

The flash of the camera sent Jeff back to the last time he’d felt this much pain. Camera flashes were normal even fifteen years ago. A superstar on the country music scene, Jeff generally got what he wanted. Only God and, when he was a child his Mama, overruled that. But God had taken his father years back. Then his older brother right when things were falling into place.

Finding the love of his life packed up in his hotel room confused Jeff.

“We’re not due on tour for a few days,” Jeff said.

Ben shook his head. “I talked to Trigger. He’s got someone to cover for me.”

“No, hon. I need my best producer.” Jeff locked the door to the hotel room. “I know this isn’t what we planned.”

Ben was fighting back tears. “Don’t tell me about the plan. I waited until you were ready. Waited for you to have the money and the house and Trigger on board. That was supposed to happen last year.”

“My brother and his wife were killed. I have a toddler nephew, a widowed mother, and a scatterbrained sister. What do you want me to do? Abandon them? Blow my career and all the money for a rainbow parade? You think that’ll sell tickets in the Bible Belt?” Jeff hated putting Ben off. They’d worked together for years and fell in love so hard he never saw anyone else in his life.

It helped that Ben was a great music producer without family or strings. But the strings that tied them together grew.

“I understand. I do.” Ben wiped his nose on his flannel sleeve. A bad habit that Jeff now found adorable. “But I can’t. I know you have to take care of your family. I admire you for that, truly.”

“Then stay. Let it all stabilize and we’ll make a new plan. I love you. I hate that taking care of my family is hurting you but it’s who I am.” Jeff stood against the door defiantly.

“I know, that’s why I can’t stay. I love that you love your family so much. It won’t change. You’ll put them first as long as they need you. Whenever they find out the truth, they’ll love you the same. I can’t sit in a hotel room—your secret—broken hearted because I’m not there with you at family dinners.”

“They’re still grieving. They’re not ready to handle the answers to those questions. How selfish is that to dump more on them?” Jeff demanded.

Ben sighed. “That’s why I’m going. Because it works for you. All of you, except me. I love you and I want you to be happy. This is the only way I can do that right now. If I stay, I’ll start resenting you and it’ll destroy us.”

“No, it won’t. We can hang on a little longer. It’ll be better soon.” Jeff felt sick and like the room was spinning.

“You’ve been saying that for a few years now. It’s eating me from the inside out. I tried. I understand you lost your brother and you can take care of the kid he left behind. You are in a position to make your family comfortable and pay for everything…you can do that. I’m so proud of you and the music we made. I’m just taking away the pressure on you to come out. You’re under enough pressure without me waiting like a ticking grenade in your closet.”

“You’re wrong. You make the pressure bearable.” Jeff moved in and kissed Ben, trying to hold him but Ben pushed him away.

“We both did our best. Okay? We’re not perfect. You’re the star and I’m the producer. I’m behind the scenes. You’re the spotlight. I can’t take the secrets anymore. No matter how much I love you.” Ben pushed Jeff to one side.

Jeff tried to stop him but Ben was every bit as strong and tall.

Ben was gone and Jeff fell to his knees with a new type of pain. He focused on breathing and that toddler nephew of his who had no parents. Jeff was the only grown man left in his family and he wouldn’t abandon them, no matter how much he wanted to chase down Ben.

You can purchase BROKEN HEARTSTRINGS at:

A loyal Chicago girl who loves deep dish pizza, the Cubs, and The Lake, CC Dragon is fascinated by the metaphysical and paranormal. She loves creating characters, especially amateur sleuths who solve mysteries or angsty sweet romances. A coffee and chocolate addict who loves fast cars, she’s still looking for a hero who likes to cook and clean…so she can write more!

Readers Entertainmenthttp://dayagency.com
Previous articleSNEAK PEEK: A Dungeon, A Vampire, and An Infatuation from C.C. Dragon
Next articlePBS Announces the Great American Read