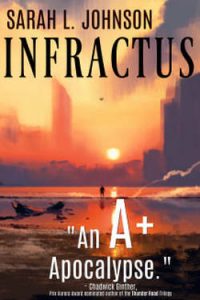 Sarah L. Johnson is a Canadian author of gritty, offbeat, and genre-defying literature. Her short story collection Suicide Stitch, received critical acclaim from Cemetery Dance and Locus Magazine, and appeared on the Calgary Herald Bestseller list for five weeks running, two of those at number one.

The key to Sarah’s success is in her intelligent writing, and devotion to the craft. As member of the LGBTQ+ community, Sarah is also passionate about queer representation in all forms of literature. This formula could never be more evident than with the launch of Johnson’s debut sci-fi / fantasy, Infractus on April 10th . Published by Coffin Hop Press, a Canadian publisher with a focus on crime, weird tales, and pulp fiction. Infractus creates a complex world coupled with a dark message.

Nancy Kilpatrick, author of Revenge of The Vampir King said of Infractus, “…smart, sassy characters and a highly creative plot… language that ratchets the story above and beyond ordinary post-apocalyptic literature; there were passages where the writing left me breathless.”

K.J. Howe, the Executive Director of Thrillerfest and acclaimed author of The Freedom Broker stated, “Sarah Johnson’s powerful tale delivers a dose of adrenaline and originality to the post-apocalyptic genre. INFRACTUS’ fearless exploration of the human spirit showcases compelling moral dilemmas that will satisfy the most demanding aficionado of the field. Irreverent dialogue and complex twists make this book a must-read for fans of cutting edge spec fic”

The initial launch will be held at C-Space in Calgary on April 19th in Sarah’s hometown of Calgary, with Owls Nest Books as the official bookseller. Sarah will then go on a cross Alberta tour with stops in every major city.

Abandoned as a newborn, a nameless boy roams the streets of Vancouver like a mouse, living by few rules, under the wing of a charismatic grifter, while a voice in his head whispers very bad things in the night. When a terrorist attack destroys the global balance of power, society bleeds into anarchy. For the mouse to survive, his rules have to change.

From the ashes of chaos, Panopticon rises, a shadow regime exercising control through surveillance, and the occasional act of erasure. The mouse – now a man – becomes an invisible assassin in their New World Order. It’s a dirty job, but for a nameless misanthrope with a terrible voice in his head, it’s just about perfect. At least, until he’s nearly decapitated by a strange woman with an even stranger proclamation of looming Armageddon. She offers him a choice: help her destroy Panopticon or take a seat for the end of the world.

The voice in his head has been biding its time, armed with a secret as old as time, as old as the world itself. It waits to speak an ancient name that will invite a reckoning. An edgy, subversive apocalypse tale that explores the depths of human existence and the heights of our collective fears. 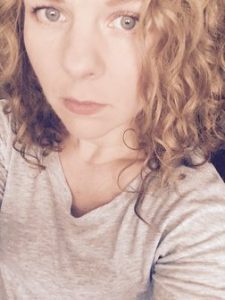 Sarah L. Johnson lives in Calgary with her noisy family and two slightly bewildered cats. She wrangles literary events at an indie bookstore for money, runs ultra marathons for fun, has a filthy mouth, and does daily battle with curly hair. Her writing skates across multiple genres: literary, sci-fi, fantasy, noir, horror, and once a romantic comedy that was so very terrible and shall be blasted from the obelisks of recorded history. Her short stories have appeared in a number of journals and anthologies including Room Magazine, Plenitude Magazine, the Bram Stoker nominated Dark Visions 1: A Collection of Modern Horror (Grey Matter Press), and Year’s Best Hardcore Horror Volume 2 (Comet Press) . Her short story collection Suicide Stitch was released in 2016 by EMP Publishing, and her first novel, Infractus, ​is coming soon.