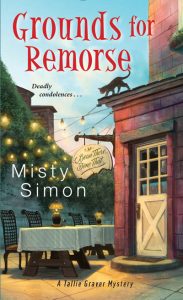 Oh, how I love research! Well, not always, as sometimes it can be tedious, or you can get so bogged down in details that you lose the zest for the story you wanted to set in this world. But fun research? Where you learn something new that enhances what you’re writing? Bring it on!

In preparing to write the Tallie Graver Mysteries series, I wanted to make sure that I had the funeral aspect right. It’s an important part of the setting for the book and in Tallie’s life, and I wanted to be able to do it justice. So I trotted down to the my local funeral home on Main Street after making an appointment with the funeral director – let’s call him Funeral Bob. My appointment with Funeral Bob was supposed to be thirty minutes, and three hours later I was still asking questions, absolutely fascinated by the in and outs of how bodies come in, where they’re stored, and how they’re prepared.

The receiving rooms at the funeral home are decorated subtly and tastefully. The purpose is to welcome the mourners of the deceased, to make them comfortable and to give them the farewell they need. This particular funeral home has several rooms as well as a covered tunnel/carport where you can have services if it’s raining or snowing.

I learned how they choose the music and that the lights in the ceiling are rose-colored to give the deceased a healthier glow. They have a whole room upstairs of tissues and flowers and thank you cards. They make the announcements on site and have a printing company that will make the beautiful pictures they put on the stands.

One room has a massive table in the center where family can sit to make arrangements. The walls are filled with niches, one for clothes you can choose for your loved one if they have nothing on hand to be buried in, one for coffin quarters (the edges of the boxes showing what is available) to choose the kind of piece to bury them in, and another case with choices for making necklaces from ashes, urns to hold cremains and eco-choices.

The whole place was just bursting with story ideas and small details that would make my book come alive, to give it that film of realism that sinks the reader into the setting. I could see Tallie living on the third floor, running up and down the back stairs. Her cat, Mr. Fleefers, would have roaming capabilities on the third floor. I could almost hear Tallie’s dad talking in the reception room and her mom putting out snickerdoodle cookies. And that was when I knew I wanted to write this story and make it set right here in my hometown, right in that funeral home, right where I knew she would live and work and struggle with putting her life back together.

Research can be a window into the soul of your character. It can ground the story and make it come to life in the imagination of the reader. It can lead you down avenues you never thought of. And it can give you great pictures to send to a publisher to use for the first cover in the series.

Funeral Bob was an absolute goldmine of information and helped in so many ways. He was tickled pink when I gave him a copy of the book and wants to carry it in the funeral home on the mantle of one of the fireplaces. When I told him it was a humorous mystery and that it might not be appropriate, his answer was “I don’t only get dead people here,” and it made me laugh so hard that I formed a new character and the beginning of a series that I hope will entertain you!

Grounds For Remorse: A Tallie Graver Mystery #2 by Misty Simon

Best friends Tallie Graver and Gina Laudermilch both seem to spend a lot of time around urns. For Tallie, they’re part and parcel of the family business, Graver’s Funeral Home. Even though she’s traded ashes for dusting with her own cleaning business, she still works part-time for her folks and lives above the funeral parlor. For Gina, they’re the vessels that con-tain her heavenly brew at her coffee shop, Bean There, Done That. And both women are learning that owning a business can make finding time for romance challenging.

But when Gina’s new beau turns out to have a wife, who barges into the coffee shop to take him home, she can’t contain her bitterness and loudly threatens to poison his cup or boil him in a vat of coffee. So when Mr. Wrong turns up dead at the bottom of a staircase inside Gina’s locked home, she finds herself at the top of the police’s suspect list. Tallie needs to sweep in to save her friend. But she’ll need to watch her step, or she may go from being a funeral home employee to becoming their next client . . .

You can purchase GROUNDS FOR REMORSE at:
Kensington Books 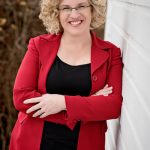 Misty Simon loves a good story and decided one day that she would try her hand at it. Eventually she got it right. There’s nothing better in the world than making someone laugh, and she hopes everyone at least snickers in the right places when reading her books. She lives with her husband, daughter and three insane dogs in Central Pennsylvania where she is hard at work on her next novel or three. She loves to hear from readers so drop her a line at misty@mistysimon.com