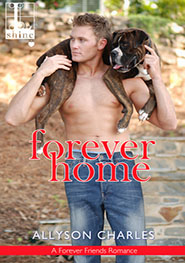 One of the most common questions writers tend to be asked is where we get our ideas. The answer to that is everywhere. I’ll read something in the paper, see something in my real life, and tweak it to make it my own. So, when I was asked to write a proposal for a romance series that would take place around a dog shelter, I didn’t hesitate. Besides the fact that I’d get to write about cute dogs and sexy men, (and I mean, who wouldn’t want to write that?) I had the perfect plot device to draw from my own life.

While currently canine-free myself, I am the proud dog-aunt to Barnaby Jones. He’s my sister’s half-Bassett Hound, half who-in-the-heck-knows-what mutt. And it was his story I wanted to tell in FOREVER HOME.

Okay, considering, FOREVER HOME is a romance novel, Barnaby’s story isn’t the main focus of the book. There are actual people involved, too. But B-dog’s origin story is a good one, albeit infuriating (though it did have a happy ending!). And it was the type of story that my heroine, Izzy Lopez, needed in order to make a self-professed non-dog person adopt a pup or two.

So, back to Barnaby and how my sister came to have him. In 2008 a financial crisis was in full swing. Many people couldn’t pay their mortgages, and houses were being foreclosed upon left and right here in Northern California. One foreclosed-upon individual, in a move of barbarity that I still can’t fathom, abandoned a pregnant Bassett Hound in his home when he moved out. Fortunately, a real estate agent came by in time and found the momma dog and the newly-born puppies. Calls were made to a rescue group and the dogs were saved.

But that’s about as far as fact parallels fiction. In FOREVER HOME, Izzy, a real estate agent, uses some creative tactics to break into an abandoned apartment building where she finds the dogs. I don’t think the real estate agent who found Barnaby pried open a window, hiked up her skirt, and climbed through, ninja-style, although that would have been awesome. Izzy was in a bit of a legal gray area regarding her actions. Okay, she was straight up breaking the law, but a working mom has to do what she’s got to do. Because of that, she tries to secretly drop the dogs off at a local shelter. The dogs will get the help they need and no one needs to know she was up to any shenanigans. The owner, Brad Cohen, thinks she’s abandoning the starving dogs and, well, you’ll just have to read the book to watch the sparks fly between the two.

One of the puppies in FOREVER HOME was loosely modeled after Barnaby. In my book, Jazz is the odd pup out in his litter, and so was Barnaby. While Barnaby’s siblings had the shortened legs of a Bassett, B-dog looks more like a pointer to me. He was, in my completely unbiased opinion, the cutest puppy ever. I wanted to imbue Jazz with that same I-just-want-to-eat-you-up quality so Izzy couldn’t help but fall in love with him and his mom. Oh yeah. And Brad, too. I keep forgetting this is a romance novel between people, and not the love a person feels for her dog. But sometimes, loving a dog is just so much easier, am I right?

You can purchase FOREVER HOME at:
Kensington Books

Readers Entertainmenthttp://dayagency.com
Previous articleAuthor Krista Davis Shares How Her Novel The Diva Cooks Up A Storm Made Her a Better Cook
Next articleMemorial Day