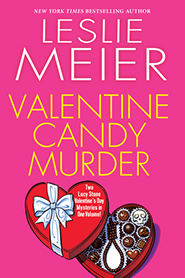 In these two beloved mysteries that have been previously published and now collected in one volume for the very first time, it’s Valentine’s Day in Tinker’s Cove, Maine—but when it comes to foul play, Pennysaver reporter Lucy Stone can’t sugar-coat the truth . . .

Lucy has barely arrived at her first library board meeting when the new librarian is found dead in the basement. The agitated group assumes Bitsy Howell was killed by an outsider—until Detective Lt. Horowitz announces that the killer is among them. Lucy knew that Bitsy rubbed some people the wrong way. But she has a hunch the murderous motives run a lot deeper. And as she snoops into the curious lifestyles and shocking secrets of Tinker’s Cove’s most solid citizens, what she finds is far from hearts and flowers . . .

Despite the frigid winter temperatures, to boost the economy, Tinker’s Cove is launching a travel promotion for Valentine’s Day. Lucy is assigned a puff piece on upscale Chanticleer Chocolate—and its deliciously handsome owner. But there’s another tantalizing tart behind the counter—sultry store manager Tamzin Graves. Leaving a throng of jealous women in her wake, it’s almost no surprise when Tamzin turns up dead, her body covered in chocolate. And as Lucy closes in on the culprit, she may find herself locked in the clutches of a half-baked killer . . .

About the author: Leslie Meier is the acclaimed author of over twenty Lucy Stone mysteries and has also written for Ellery Queen’s Mystery Magazine. She is currently at work on the next Lucy Stone mystery. Readers can visit her website at lesliemeierbooks.com.

YOU CAN PURCHASE VALENTINE CANDY MURDER AT:
Kensington Books 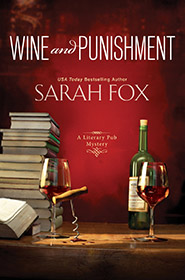 Wine And Punishment: A Literary Pub Mystery #1 by Sarah Fox
In the first in an engaging new mystery series from USA Today bestselling author Sarah Fox, the owner of a charming literary pub finds her fresh start on the rocks thanks to a case of murder.

Booklover Sadie Coleman knows that in life, as in fiction, the right setting can make a world of difference. The small town of Shady Creek, Vermont, seems like the perfect place to start over after losing her Boston job to a merger and her relationship to her ex’s gambling addiction. She’s bought and redecorated the old grist mill pub, transforming the Inkwell into a cozy spot where tourists and regulars alike can enjoy a pint or a literary-themed cocktail, or join one of several book clubs.

Little by little, Sadie is adjusting to the rhythms of her new home. Fall in Shady Creek is bookmarked by the much-anticipated Autumn Festival, complete with a pumpkin catapult competition and pie bake-off. Unfortunately, the season also brings an unwelcome visitor—Sadie’s ex, Eric, who’s angling for a second chance . . .

Before Sadie can tell Eric to leave, he’s found dead near the Inkwell. When the local antique shop catches fire on the same night, it’s clear the town is harboring at least one unsavory character. Now, with her Aunt Gilda, her friend Shontelle, and the pub’s patrons all in the mix, Sadie must uncover the truth . . . before a killer declares last call.

About the Author: Sarah Fox is the author of the Music Lover’s Mystery series and the USA Today bestselling Pancake House Mystery series. When not writing novels or working as a legal writer, she can often be found reading her way through a stack of books or spending time outdoors with her English Springer Spaniel. Sarah lives in British Columbia and is a member of Crime Writers of Canada. Visit her online at AuthorSarahFox.com.

YOU CAN PURCHASE WINE AND PUNISHMENT AT:
Kensington Books 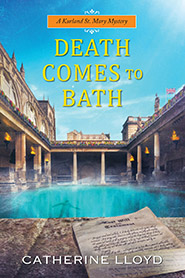 On a visit to Bath, Major Sir Robert Kurland and Lady Lucy Kurland discover that the English spa town is not beneficial to everyone’s health . . .

After Sir Robert’s injury from the battle of Waterloo begins troubling him again, his wife Lucy insists they relocate from the village of Kurland St. Mary to Bath, along with her sister Anna, so that Robert can take the waters and recover.

At the Roman baths, Robert befriends an elderly and pugnacious businessman, Sir William Benson, ennobled by the Crown for his service to industry. Their acquaintance is short-lived, however, when the man is found drowned in the baths. Robert vows to find his killer, with Lucy’s aid.

The members of Sir William’s family seem the most obvious suspects to benefit from the wealthy man’s death, but his will has gone missing. To deduce who sent Sir William to a watery grave, Robert and Lucy must investigate with the utmost discretion—before they too find themselves in over their heads . . .

About the Author: Catherine Lloyd was born just outside London, England, into a large family of dreamers, artists, and history lovers. She completed her education with a master’s degree in history at the University College of Wales, Aberystwyth, and uses the skills she gained there to research and write her historical mysteries. Catherine currently lives in Hawaii with her husband and four children. Her website is located at catherine-lloyd.com.

YOU CAN PURCHASE DEATH COMES TO BATH AT:
Kensington Books