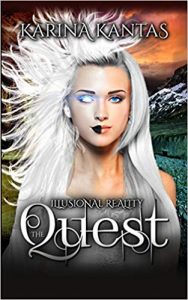 Karina is doing a giveaway!! Buy The Quest in paperback and get the eBook of book one of Illusional Reality for free. You must send proof of purchase to receive your free eBook. Follow this link to submit your receipt.

THE QUEST FOR THE TRUTH BEGINS

When Hati, notices a Tsinian crystal glowing, she knows she must stick to her word and return to her homeland as Thya. Knowing her kinsmen needed her, there was no hesitation. Even though there was more to lose than just her life.

Once more a prophesy was given that informed the reader of oracles, that only Thya could stop the war and save not just her people, but the rest of Enumac from Kovon’s psychotic future plans.

Along with three other companions, Thya is sent on a perilous quest to locate a dark crystal which holds evil known as the Dark Force. The group are tried and tested throughout their journey by monsters, death and courage. New friendships will be formed and other lost. Thya’s power becomes stronger and a second will threatens to take over her mind body and soul.

A terrifying surprise waits for them in the city of Helkon.
Will they survive.
Will Thya return to Tsinia and for the final showdown with Kovon.

City of Helkon
The door to the cell unlocked and Thya stood up. King Theon slowly entered. Almost cautiously. With his hands on his hips, he tilted his head and his eyebrows creased. The king pointed to her and then to a bowl that his servant held out. Thya peered into it and saw the same glittery substance that she had used in the throne room. It seemed stupid to refuse him. She did as she was told and, once the spell touched her lips, Theon’s words became clear.

She turned around as instructed. A Rant pushed her hair aside, exposing her bare back and neck.

“Tis so then,” Theon exclaimed.

Thya turned around to face him. “What is so?”

He bent his head to the side, and his eyes widened. “You are not aware?” He stepped back. “Yet you possess the ancient emblem.” 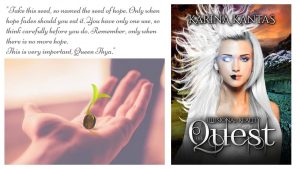 “What ancient emblem? Will you not reveal the significance?” She would not beg even though she needed answers.
Theon’s sudden change of behaviour concerned her. His stance and facial expressions went from awe to surprise, then almost to fear. His head tilted again, and his hand rested on his chin as he walked around her.

“Do you not comprehend your greatness? Do you not realize who you are?”

“Of course, I am Queen Thya of Tsinia, Guardian of the Changlins.”

“Have you not marvelled at the difference with yourself and that of other Ganties? Surely you have experienced strength and a will that cannot be bested?”

“You possess the emblem.”

“Tis naught but a birthmark.”

“Nay, Queen. You are mistaken. The mark as you name it, is an emblem of exceptional greatness. I understand now why your thoughts were blocked from me. Immortality appears with a value. I wonder what you would bestow for the quest of eternal youth?”

Nothing he said made sense to her but, before she could demand answers, the King jumped up and down and rubbed his hands like an excited young boy. “I will present you to the Bustak, as homage,” he said, rubbing his hands together as a huge smile etched on his face.

His next words were foreign to her. The magic of the spell had worn off, so she just stood and watched the Rant and the king communicate, hoping to get an idea of what was going to happen next.

Theon grinned and patted the guard’s back. They spoke briefly and nodded their heads as they continued to stare at her. She wished she understood. Who or what was the Bustak? The name raised goose pimples on her arms, and the belief that this was, again, the end of the road for her returned.

The guard led her from the cell and back into the palace. There were no shackles, no Rant gripping her arms. They

walked beside her but kept glancing at her. She ignored them and concentrated on calling out with her mind. Alkazar, my love, where are you? She repeated it over and over, with no knowledge of whether he could hear her but, if he had, there was no answer.

You can purchase THE QUEST at:

“The only film that grabbed my attention and held me there with an open mouth, was the amazing Lord of the Rings trilogy.

They said that whoever took that 3-book fantasy on, had to be crazy. Peter Jackson wasn’t crazy, but he was a hobbit in his heart.

His vision and attention to detail just made this magical film pop. It was after watching the first film, Fellowship of the Ring, that the story of Becky and her magical adventure took place in my mind, heart and soul.

By the time the 1hr journey from the cinema had ended I had the names, plot, conflicts, storyline, everything written in my head. and then as most writers know, once you’re in the “zone” there is no stopping you.  By the time the second film, Two Towers, book two, The Quest was again plotted in my mind and it didn’t take long to get the first draft on paper.” 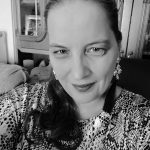 She also writes short stories and when her imagination is working over time, she writes thought provoking dark flash fiction.

There are many layers to Karina’s writing style and talent. As is displayed in her flash fiction collection, Heads & Takes. And in UNDRESSED she opens up more to her fans. Giving them another glimpse of her warped mind.

Karina writes in the genres of fantasy, romance, sci-fi, horror, thrillers and comedy.

Her inspirations are the author S.E.Hinton and the rock band Iron Maiden.
You can find her on Facebook and Twitter, where she loves hanging out with her readers.