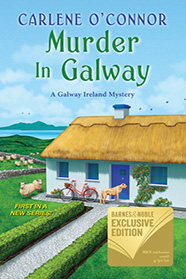 Murder In Galway: A Galway Ireland Mystery by Carlene O’Connor

First in a new series!

New Yorker Tara Meehan’s first trip to Galway may be her last . . .

Tara never imagined her introduction to Ireland like this—carrying her mam’s ashes to honor her final request: “Tell Johnny I’m sorry . . . Take me home.” She’s never met her mam’s estranged brother, Johnny Meehan, who owns an architectural salvage business in Galway. Although Tara is immediately charmed by the medieval city, the locals seem wary of strangers and a gypsy warns her that death is all around.

When Tara arrives at her uncle’s stone cottage, the prophesy seems true. A dead man lies sprawled over the threshold in a pool of blood. The victim turns out to be Johnny’s wealthiest client, and her missing uncle is the garda’s number-one suspect. In trying to find Johnny and solve the crime, Tara uncovers her mam and uncle’s troubled past. But with a desperate killer about, she had better mind herself, or they’ll be tossing her ashes in Galway Bay . . .

You can purchase MURDER IN GALWAY at:
Kensington Books 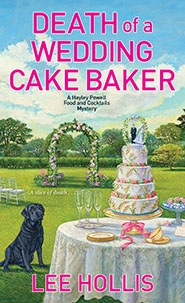 For Matron of Honor Hayley Powell, catching a half-baked poisoner before her friend’s wedding will be icing on the cake . . .

Liddy Crawford, best friend of food and cocktails columnist Hayley Powell, is getting married. The wedding is the talk of the town in Bar Harbor, Maine, including snide gossip about the age gap between the bride and her groom, local lawyer Sonny Lipton. But the cruelty of the comments is nothing compared to the nasty wedding cake baker, Liddy’s quarrelsome cousin Lisa.

So when the belligerent baker is found facedown in a three-tier cake, the victim of a poisoned slice, there are more suspects in town than names on the guest list. With Sonny getting cold feet, Liddy getting hot under the frilly collar of her wedding gown, and a killer possibly crashing the ceremony, Hayley vows to solve the crime before her best friend walks down the aisle . . .

You can purchase DEATH OF A WEDDING CAKE BAKER at:
Kensington Books 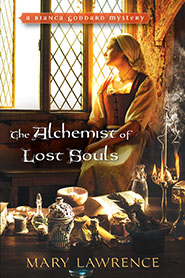 “Bianca Goddard is back—and this time she’s grappling with murderous magic. Another page-turning historical mystery from Mary Lawrence in this superb series.” —E.M. Powell, author of the Stanton & Barling mysteries

A dangerous element discovered by Bianca Goddard’s father falls into the wrong hands . . . leading to a chain of multiple murders.

Spring 1544: Now that she is with child, Bianca is more determined than ever to distance herself from her unstable father. Desperate to win back the favor of King Henry VIII, disgraced alchemist Albern Goddard plans to reveal a powerful new element he’s discovered—one with deadly potential. But when the substance is stolen, he is panicked and expects his daughter to help.

Soon after, a woman’s body is found behind the Dim Dragon Inn, an eerie green vapor rising from her breathless mouth. To her grave concern, Bianca has reason to suspect her own mother may be involved in the theft and the murder. As her husband John is conscripted into King Henry’s army to subdue Scottish resistance, Bianca must navigate a twisted and treacherous path among alchemists, apothecaries, chandlers, and scoundrels—to find out who among them is willing to kill to possess the element known as lapis mortem, the stone of death . . .

Praise for Death at St. Vedast

You can purchase THE ALCHEMIST OF LOST SOULS at:
Kensington Books 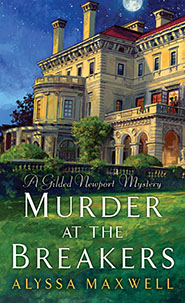 Murder At The Breakers: A Gilded Newport Mystery #1 Alyssa Maxwell

As the nineteenth century comes to a close, the illustrious Vanderbilt family dominates Newport, Rhode Island, high society. But when murder darkens a glittering affair at their summer home, reporter Emma Cross learns that sometimes the cream of the crop can curdle one’s blood. . .

Newport, Rhode Island, August 1895: She may be a less well-heeled relation, but as second cousin to millionaire patriarch Cornelius Vanderbilt, twenty-one-year-old Emma Cross is on the guest list for a grand ball at the Breakers, the Vanderbilts’ summer home. She also has a job to do—report on the event for the society page of the Newport Observer.

But Emma observes much more than glitz and gaiety when she witnesses a murder. The victim is Cornelius Vanderbilt’s financial secretary, who plunges off a balcony faster than falling stock prices. Emma’s black sheep brother Brady is found in Cornelius’s bedroom passed out next to a bottle of bourbon and stolen plans for a new railroad line. Brady has barely come to before the police have arrested him for the murder. But Emma is sure someone is trying to railroad her brother and resolves to find the real killer at any cost. . .

“Sorry to see the conclusion of Downton Abbey? Well, here is a morsel to get you through a long afternoon. Brew some Earl Grey and settle down with a scone with this one.” —Washington Independent Review of Books

You can purchase MURDER AT THE BREAKERS at:
Kensington Books