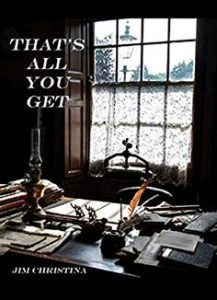 Musings from a mind not yet healed from the ravages of years gone by, a standout collection of thoughtful poetry and heart-tugging lyrics.

Author and musician, Jim Christina lays himself bare in That’s All You Get, a raw and poignant collection of lyrical prose. In his latest release, Christina’s talent is evident as he takes the reader on a journey of discovery and the lives, real and fiction, that have inspired his writings. Each song lyric or poem is accompanied by a moment of thoughtful, unwavering honesty and reflection, or shares the missing piece of the dream plucked from the night that became desperate to be written on the page.

Opening the collection, Christina says, “I spent hours crafting prose, poetry and lyrics for music written or yet to be written and in doing so discovered one basic truth of life and writing. Whereas music bars and notes come and go, the lyric or poetry of the song, if you will, is immortal.” Not only will readers of That’s All You Get get a sense and understanding of who Jim Christina is, the man behind the pen and melody, but a deeply personal and immersive look into his soul, and it will stick with you long after you’ve finished.

ABOUT THE BOOK
Hours crafting prose, poetry and lyrics for music written or yet to be written and in doing so discovered one basic truth of life and writing. Whereas music bars and notes come and go, the lyric or poetry of the song, if you will, is immortal. They can take you far away to exotic lands or leave you on your couch watching the rain fall endlessly during the fall, winter and spring. Follow a whaling vessel in search of the blue whale, sing the lament of a young man alone on the ocean, follow the musings of an ancient scribe as he follows life trails or follow the battles raging or yet to be raging in a young soldier’s heart. 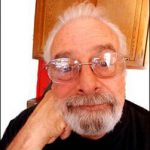 Jim Christina was born into an Air Force Family in 1949. Living all over the world before finally landing in Del Mar, California. A musician, historian, writer, poet, playwright… all things describing Jim Christina. A graduate of San Dieguito High School in Encinitas, Ca, and Old Reliable University in Washington State, Jim spent almost ten years in the US Army before joining his father in the family’s paint business.

While managing a territory in Washington and Oregon, Jim began composing music and writing the lyrics. Forming a band in Tacoma, Washington, “Sundown”, Jim’s music and the melody of Sundown played up and down the state before Jim moved to California. For years a character had been rolling around in his mind and in 2008,, the character became the Hunter and the series was born. They are stories of an aging man hunter and his protege’ in Arizona in the last half of the nineteenth century.

Jim is available for interviews, media appearances, speaking engagements, and/or book review requests – please contact mickey.creativeedge@gmail.com by email or by phone at 403.464.6925