SNEAK PEEK: Worldshapers – Master of the World by Edward Willett 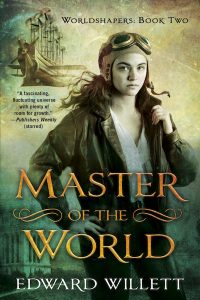 The Worldshapers fantasy series by award-winning Saskatchewan author Edward Willett continues with the September 10 release of Book 2, Master of the World, from DAW Books, in trade paperback, audiobook, and e-book formats.

The critically acclaimed first book, Worldshaper (which received a starred review in Publishers Weekly and was longlisted for Canada’s prestigious Sunburst Award), just came out in mass-market paperback; it’s also available as a trade paperback, audiobook, or e-book.

Master of the World, takes the central character, Shawna Keys, into a new, steampunk-flavoured adventure.

Shawna has fled the world she only recently discovered she Shaped, narrowly escaping death at the hands of the Adversary who seized control of it…and losing her only guide, Karl Yatsar, in the process.

Now she finds herself alone in some other Shaper’s world, where, in her first two hours, she’s rescued from a disintegrating island by an improbable flying machine she recognizes from Jules Verne’s Robur the Conqueror, then seized from it by raiders flying tiny personal helicopters, and finally taken to a submarine that bears a strong resemblance to Captain Nemo’s Nautilus. Oh, and accused of being both a spy and a witch.

Shawna expects—hopes! —Karl Yatsar will eventually follow her into this new steampunky realm, but exactly where and when he’ll show up, she hasn’t a clue.

In the meantime, she has to navigate a world where two factions fanatically devoted to their respective leaders are locked in perpetual combat, figure out who the Shaper of the world is, find him or her, and obtain the secret knowledge of this world’s Shaping. Then she has to somehow reconnect with Karl Yatsar and escape to the next Shaped world in the Labyrinth…through a portal she has no idea how to open…to continue her quest to convey the knowledge of all the Shaped worlds to Ygrair, the mysterious woman at the centre of the Labyrinth.

Only Ygrair, Karl has told her, can defeat the Adversary, who is determined to enslave and ultimately destroy the Shaped worlds (and the billions who live within them)—and only Shawna, he claims, can gather the knowledge Ygrair needs to do so. No pressure!

Praise for Master of the World:

“Highly amusing and fun…this series is for fans of any piece or part of geek culture. With the infinite possible worlds in the Labyrinth, every book should be a new, enjoyable adventure.” – Booklist

“This novel sets up a fascinating, fluctuating universe with plenty of room for growth for the main characters, and readers will eagerly join their journey.” —Publishers Weekly (Starred Review)

Edward Willett is the Aurora Award-winning author of more than sixty books of science fiction, fantasy, and non-fiction. He is currently writer-in-residence for the Saskatoon Public Library. Master of the World is his tenth novel for New York’s DAW Books, one of the major publishers of science fiction and fantasy. His short-story collection Paths to the Stars (Shadowpaw Press) was shortlisted for two 2019 Saskatchewan Book Awards. He won a Saskatchewan Book Award in 2002 for his YA fantasy Spirit Singer, recently re-released by Shadowpaw Press, and has been shortlisted multiple times.

More information can be found about Edward at the following: www.edwardwillett.com. Edward is available for interviews, media appearances, speaking engagements, and/or book review requests. Please contact mickey.creativeedge@gmail.com by email or by phone at 403.464.6925.

Readers Entertainmenthttp://dayagency.com
Previous articleA Sneak Peek and Interview with Kassandra Montag Author of AFTER THE FLOOD
Next articleRomance Includes You Mentorship Initiative From Harlequin Publishing