A 100-Year-Old Holocaust Survivor on How Books Save Lives 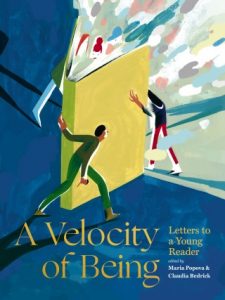 “There are times when dreams sustain us more than facts. To read a book and surrender to a story is to keep our very humanity alive.”

BY MARIA POPOVA (reprinted with permission from Brainpickings.org)

It is often said that books save lives. Most of the time, however heartfelt the sentiment, it is figurative. Every once in an improbable while, it approximates the literal. But only on the rarest of occasions, in the most extreme of circumstances, do books become lifelines in the realest sense.

One such occasion is immortalized in A Velocity of Being: Letters to a Young Reader (public library) — the collection I spent eight years putting together in the hope of showing young people how essential reading is to an inspired and inspiring life. There are original illustrated letters about the transformative and transcendent power of reading from some immensely inspiring humans — scientists like Jane Goodall and Janna Levin, artists like Marina Abramović and Debbie Millman, musicians like Yo-Yo Ma, Amanda Palmer, and David Byrne, entrepreneurs like Richard Branson and Tim Ferriss, poets like Mary Oliver, Elizabeth Alexander, and Sarah Kay, media pioneers like Kevin Kelly, Jad Abumrad, and Shonda Rhimes, beloved writers of literature for young people like Jacqueline Woodson, Judy Blume, and Neil Gaiman, and a great many celebrated authors of books for so-called grownups. But one of the most powerful letters comes from someone whose name might not, or at least not yet, mean much to many: Helen Fagin.

Helen was twenty-one when her family was imprisoned in the Warsaw Ghetto in Nazi-occupied Poland. She and her sisters managed to escape, but they lost both of their parents in the Holocaust. Helen arrived in America not speaking a word of English, then went on to earn a Ph.D. and teach literature for more than two decades. She devoted her life to elucidating the moral lessons of humanity’s darkest hour and was instrumental in the creation of the Holocaust Memorial in Washington, D.C. To this day, she remains a voracious reader of literature and moral philosophy, swimming effortlessly from Whitman to Camus and back again in a single conversation.

Helen happens to be my dear friend Neil Gaiman’s cousin. One day over dinner, having just visited her in Florida, a very animated Neil told me the incredible story of how a book — a particular book — became a lifeline for the teenage girls at the secret school Helen had set up in the Warsaw Ghetto as an antidote to the innumerable assaults against dignity to which the Nazis subjected these Jewish youths: the denial of basic education. Her story stopped me up short as the profoundest embodiment of the core ethos of A Velocity of Being, and so I invited her to tell it in a letter.

To celebrate the publication of the book, which Helen sees as an invaluable part of her legacy, I asked her to read her letter for the New York Public Library launch event. She was 97 at the time she wrote her letter and is approaching her 101st birthday as she reads it:

YOU CAN WATCH THE VIDEO BY FOLLOWING THIS LINK

Could you imagine a world without access to reading, to learning, to books?

At twenty-one, I was forced into Poland’s WWII ghetto, where being caught reading anything forbidden by the Nazis meant, at best, hard labor; at worst, death.

There, I conducted a clandestine school offering Jewish children a chance at the essential education denied them by their captors. But I soon came to feel that teaching these sensitive young souls Latin and mathematics was cheating them of something far more essential — what they needed wasn’t dry information but hope, the kind that comes from being transported into a dream-world of possibility.

One day, as if guessing my thoughts, one girl beseeched me: “Could you please tell us a book, please?”

I had spent the previous night reading Gone with the Wind — one of a few smuggled books circulated among trustworthy people via an underground channel, on their word of honor to read only at night, in secret. No one was allowed to keep a book longer than one night — that way, if reported, the book would have already changed hands by the time the searchers came.

I had read Gone with the Wind from dusk until dawn and it still illuminated my own dream-world, so I invited these young dreamers to join me. As I “told” them the book, they shared the loves and trials of Rhett Butler and Scarlett O’Hara, of Ashley and Melanie Wilkes. For that magical hour, we had escaped into a world not of murder but of manners and hospitality. All the children’s faces had grown animated with new vitality.

A knock at the door shattered our shared dream-world. As the class silently exited, a pale green-eyed girl turned to me with a tearful smile: “Thank you so very much for this journey into another world. Could we please do it again, soon?” I promised we would, although I doubted we’d have many more chances. She put her arms around me and I whispered, “So long, Scarlett.” “I think I’d rather be Melanie,” she answered, “although Scarlett must have been so much more beautiful!”

As events in the ghetto took their course, most of my fellow dreamers fell victim to the Nazis. Of the twenty-two pupils in my secret school, only four survived the Holocaust.

The pale green-eyed girl was one of them.

Many years later, I was finally able to locate her and we met in New York. One of my life’s greatest rewards will remain the memory of our meeting, when she introduced me to her husband as “the source of my hopes and my dreams in times of total deprivation and dehumanization.”

There are times when dreams sustain us more than facts. To read a book and surrender to a story is to keep our very humanity alive.

Special thanks to Helen’s children, Gary and Judith Fagin, for filming this video, and most of all to Neil and Amanda for bringing this remarkable person into my world and, through her contribution to A Velocity of Being: Letters to a Young Reader, into our shared human world. What an honor.

Complement with a peek inside this massive labor of love eight years in the making, all proceeds from which we are donating to the New York public library system, then sit down with a cup of tea and watch the recording of the NYPL launch celebration — a magical evening of readings by sixteen of our letter writers, original art for the letters, live literature-inspired music, and a roomful of largehearted love of books.