An Interview With Author Bethany Turner 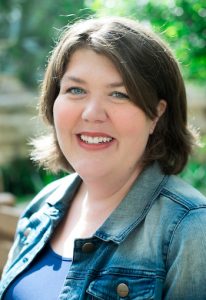 In 2017, you wrote your debut novel, The Secret Life of Sarah Hollenbeck, which was followed by your second book, Wooing Cadie McCaffrey, in 2019. Can you provide readers with a brief description of your newest tale, Hadley Beckett’s Next Dish?
Hadley Beckett’s Next Dish explores the world of culinary entertainment. These characters are not just chefs—they’re celebrity chefs. Hadley and Max are both brilliant, innovative, and successful—but on a personal level, they could not be more different. While Hadley and Max are together on-screen for the first time, filming a cooking competition, Max reaches his breaking point and has a very public meltdown. When Hadley next sees him, months later, he seems to be a kinder, gentler Max Cavanagh. The question is, has he really changed? Or is he just trying to get in her good graces because he needs her help to revive his career?

Hadley Beckett’s Next Dish focuses on the lives of two celebrity chefs. How did you come up with this fun plot?
I loved the idea of combining food and romance, but my absolute favorite stories to write tend to have an overlap into the entertainment world—Sarah Hollenbeck was a bestselling author, Cadie McCaffrey worked at a sports television network. So, I really started getting excited about this story when I decided to put Hadley Beckett on TV. There is something we uniquely love about celebrity chefs, I think. They aren’t actors, per se, so we’re pretty likely to believe that who they are on TV is who they really are in life. We feel like we know them—and I think all of us who love cooking shows have our favorite chefs. And we just love watching them cook! I think food entertainment is a fascinating world to explore.

Did it require special research to write about the culinary world? 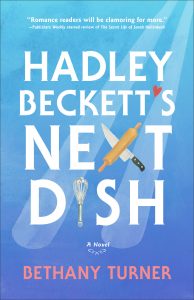 Oh my goodness, yes. I’d already watched a lot of cooking shows throughout my life, so I already knew a lot there. I zeroed in on a few shows that became the strongest inspiration for my fictional chefs. But honestly, most of the research was necessary because I don’t cook! Not much anyway, and definitely not well! The idea was so fun at first, because I was really only thinking about writing about the chefs as people and as celebrities. Pretty quickly it dawned on me that at some point, these chefs were going to have to cook. And I couldn’t write about them cooking unless I did a lot of research and studied a lot of recipes. So, I did my best. I’m just so grateful for amazing editors who made comments like, “Why is he preheating the oven to cook a risotto?”

The main characters, Maxwell Cavanaugh and Hadley Beckett, are polar opposites. Did you find it difficult to create a world where these two could actually get along and in the end thrive in both their professional and personal lives?
It was difficult, yes. I knew that there was room for both of them at the top of the food entertainment ranks even though they are such opposites—just think of Gordon Ramsay and Pioneer Woman as an example of how possible that is—but how was I ever going to bring them together? In the end, I knew it all had to be about clearing away the layers of persona and reputation—good and bad—and shaking it all out until all that remained were two people united in their love of cooking. And not just as a skill and a career, but as a sanctuary that has saved them both countless times throughout their lives. Once the public personas cleared away, I knew Max and Hadley would be able to connect over mutual brokenness and a shared passion.

In addition to romance and humor, you also sprinkle your novels with plenty of pop culture references. How did you become so enamored with pop culture?
I grew up in a family that watched television and movies together, listened to every type of music, and on one specific occasion, performed the entire Original Broadway Cast album of Camelot using my stuffed animals. For us, pop culture was something that brought us together. Sadly, I don’t think that tends to be the case as often in families today—probably because every member of the family can watch whatever they want on their own device, with their headphones on. But growing up with a family that huddled around the TV together definitely left its mark on me.

You are not afraid to tackle some sensitive topics in your writing. How have humor and empathy helped you connect with your readers?
The thing is, life is funny. Sometimes it’s ironic funny, sometimes it’s ha-ha funny, sometimes it’s just plain weird funny. But it’s never boring. And more often than not, the real, very serious issues we deal with throughout our lives aren’t happening in a very melodramatic way with perfectly shed tears and neatly tied bows to wrap it all up at the end. We ugly-cry. We lash out when we shouldn’t. We laugh in the saddest of moments, because the laughter is our best defense—and often therapeutic, to boot! By dealing with some very real, very sensitive topics while keeping all of that in mind, I think my readers and I have been able to break through some defenses and barriers together. And, just like laughing with a friend in the saddest, sometimes most seemingly inappropriate moments, it has seemed to create some connection that I treasure.

What are you working on next?
I don’t officially know what’s next just yet, but I’m currently enjoying revisiting some old fictional friends of mine. I have a couple manuscripts from years ago that haven’t yet seen the light of day yet— and maybe they never will!—and I’ve really been enjoying pulling them out and seeing how I can make them stronger.

How can readers connect with you?
My absolute favorite connection point is within my reader group on Facebook. It’s called “The Book Club Closest to My House” (named in honor of Sarah’s book club in The Secret Life of Sarah Hollenbeck) and it is for anyone who has read and connected with at least one of my stories. (It’s not a spoiler-free environment—so we talk about everything!) I can also be found on Facebook and Instagram as @seebethanywrite. And, of course, I hope everyone will stop by my website at seebethanywrite.com. There you can learn a little bit more about me and sign up for my newsletter—among other things! I also love connecting with readers through email. My email address is bethany@seebethanywrite.com.

Jocie McKadehttps://www.jociemckade.com/
Her fiction writing has received the Author / Ambassador at Library Journal Self-e Authors, Winner Queen of the West Reader Favorite Award, Amazon Bestseller - Historical, Double finalist in the Next Generation Indie Book Awards in the Mystery and Humorous Categories. Writing humorous cozy mysteries and romantic comedy, Jocie can find humor in most everything, even when she shouldn't. She lives in the Midwest on Dust Bunny Farm with her family.
Previous articleShadow Flight by Christine Feehan Book Trailer
Next articleStephanie Meyers Releasing New Book