The Escape by David Baldacci. 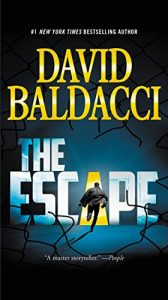 John Puller Jr. is a Chief Warrant Officer in the Army’s Criminal Investigation Division (CID). He is the best the Army has to offer when it comes to a criminal investigation.

In this third book in the series, John is sent to work on the most important case of his career……finding his brother, Robert.

Robert Puller was sentenced to life imprisonment for espionage. An Air Force Lt. Colonel, Robert was a brilliant (genius level) officer on his way to the top when he was arrested, tried, found guilty, and sent to Leavenworth two years ago.

One night a typical (I know from experience….Rock Chalk!) Kansas storm hit Leavenworth. The power went out AND the backup generators died. Opposite of what was suppose to happen, the jail doors OPENED forcing the local Army base to send in a platoon of MP’s.

When the dust cleared, only one person was missing…..Robert…..and in his bunk was a body.

Normally, a CID agent who is related to a suspect is not assigned to the case, but, in this instance, because of extreme danger to the United States, the authorities think Robert will trust Puller, and he is on the case.

Puller is assigned the help of agent Victoria Knox from INSCOM, the Army’s Intelligence and Security Command.

Problem is….Puller does not trust her….at all, and all hell is breaking loose with deception, murder, and intrigue that goes almost all the way to the top.

It will take all of Puller’s skills to survive let alone investigate his brother’s escape.

To find out what happens, you will have to read the book. ?

“The Escape” is a fun thriller that, unfortunately, follows a similar plot device as the previous book with only a minor twist: Puller meets a very capable female agent, she gains his trust, she helps him out of several scrapes, then she…..well, you know I can’t tell you what happens.