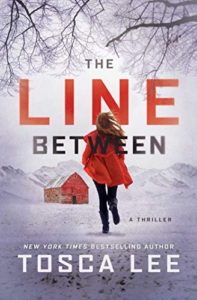 New York Times bestselling author Tosca Lee won two International Book Awards this week—one each for her 2019 pandemic thriller, The Line Between, and its 2019 sequel, A Single Light.

The double win is the latest highlight in a series of award nominations for the duology, which have already won Literary Titan silver (The Line Between) and gold (A Single Light), and finaled for many others including the High Plains Book Awards, the Library of Virginia’s People’s Choice Awards, Oklahoma Romance Writer’s National Readers’ Choice Awards (The Line Between), Killer Nashville’s Silver Falchion, and Realm Makers Awards (both books). The Line Between was also a Goodreads Choice Awards semifinalist for best mystery/thriller of 2019.

The International Book Awards celebrates excellence in all sections of the publishing industry. Over 2000 entries were submitted to this year’s awards.

The Line Between duology centers around 22 year-old main character Wynter Roth, who has just escaped a Midwest cult as a frightening disease begins its spread across the U.S. The Line Between released January, 2019 from Howard Books/Simon & Schuster. The book’s sequel, A Single Light (released September, 2019, Howard Books/Simon & Schuster) comes to paperback August 18. A Single Light is currently on sale for $1.99 in eBook through the end of the month.

Watching the news one year after the release of The Line Between, Lee—who has 11 bestselling novels to her credit—calls life “a bit surreal.”

The Line Between has been optioned by Radar Pictures (Jumanji) and Ed Burns’ Marlboro Road Gang Productions (Public Morals) and is in development for television as first reported by Deadline Hollywood: https://deadline.com/2019/01/edward-burns-radar-developing-the-line-between-thriller-novel-for-television-1202538907/

THE LINE BETWEEN by Tosca Lee

A SINGLE LIGHT by Tosca Lee 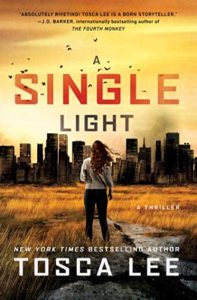 Tosca received her B.A. in English from Smith College. A lifelong world adventure traveler, she lives south of Fremont, Nebraska with her husband and three of four children still at home. To learn more about Tosca, please visit ToscaLee.com.

Tosca is available for interviews and media appearances. Please contact mickey.creativeedge@gmail.com by email or by phone at 403.464.6925.

Jocie McKadehttps://www.jociemckade.com/
Her fiction writing has received the Author / Ambassador at Library Journal Self-e Authors, Winner Queen of the West Reader Favorite Award, Amazon Bestseller - Historical, Double finalist in the Next Generation Indie Book Awards in the Mystery and Humorous Categories. Writing humorous cozy mysteries and romantic comedy, Jocie can find humor in most everything, even when she shouldn't. She lives in the Midwest on Dust Bunny Farm with her family.
Previous articleBEHIND THE WORDS: VICKY DELANY
Next articleHolly’s Book Review: My Survival: A Girl on Schindler’s List by Rena Finder