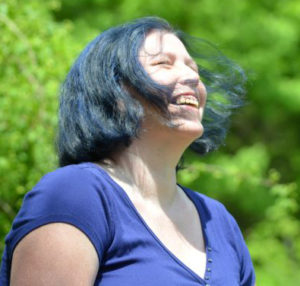 That time I asked a perfect stranger to… by Kristine Raymond

I believe the adage goes something like diving in head first, but I approached my writing career the way I do most things in my life – butt first.  I did zero research beforehand; knew nothing of book covers and formatting and all that other ‘bookish’ stuff that indie authors are expected to take care of, so choosing a photographer and models for my first creation was a learning experience.  As was the price tag that went along with it.

After using professionals for the first two covers of my shiny, new, yet-to-be-discovered-by-readers, series, my ever-dwindling budget necessitated the need for an alternative.

I could find models and take the pictures myself!

Now, this would be a great time to reference my opening statement.  With no clue as to how to go about actually finding people willing to pose for my book covers, I began scanning the crowd anytime I set foot outside my house.  The lady with the long brown hair in aisle three of Walmart?  Hmmm…she sorta looks like my character.  Or, what about the guy pumping gas?  Wonder if he’d be up for a photo shoot?

Over the next few weeks, after lining up several students from the drama department of a nearby college, I only needed one more dark-haired, blue-eyed, tall and rugged-looking guy to fill my quota.  The answer to my prayers strutted past our table while I was lunching with my husband at Mellow Mushroom.

Well aware that I was on the prowl, The Hubs nodded and took another bite of pizza.

“Do you think he’s a customer or does he work here?  I’m going to ask.”

Summoning our waitress, I inquired about the handsome devil who’d strolled into the bar area.  Elated to discover he was an employee – the knowledge that he was on the clock giving me time to fine-tune my pitch – I scarfed the rest of my Holy Shitake Pie and waited impatiently for The Hubs to finish his Mighty Meaty.

“Are you almost done? I don’t know what time that guy’s shift ends.”

Swallowing the last bit of crust, my one-and-only for the past 27 years gazed at me with an expression of humor – and just a touch of chagrin – and announced, “I’ll be in the truck.”

After paying the bill, I summoned my courage and went in search of my unsuspecting victim.

“Would you like to be on a book cover?”

Confusion clouded his eyes.  “I thought you wanted a beer or something.”

I launched into my pitch, my elaborate (and slightly convoluted) explanation convincing him, though I suspect hearing he’d be reimbursed for his time and travel expenses helped seal the deal.  Grinning ear to ear, I practically skipped out to the parking lot where The Hubs waited patiently.

“Do you think I’m weird for walking up to a complete stranger and asking him to pose for me?” 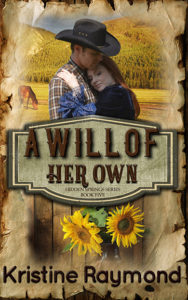 Here’s a look at Kristine’s latest release A WILL OF HER OWN:

Carly Fitzpatrick had married the love of her life…and lost him in a tragic accident.

With no intention of ever falling in love again, she prefers to rely on herself to provide for her two young sons.  She doesn’t count on meeting the one man who could change her mind.

Will Buchanon is a man on a mission.  For twelve years he has been tracking an imposter; and the trail leads to Hidden Springs.  His only objective is to bring the criminal to justice.  Falling in love is not part of his plan.

Sparks fly from the first moment they meet but Carly resists Will at every turn, refusing to surrender to her desires.  When her life is put in jeopardy, he risks everything to save her, and in the process proves that he is worthy of her love.

Can he win the heart of the woman who has a will of her own?

“I’d rather not discuss it if it’s all the same to you,” she responded, looking out into the distance.

Angrily, he grabbed her arm, turning her back to face him.  “It’s not all the same to me.  I care about you; a lot.  This meant something, at least to me.  I don’t go around taking women out for rides every chance I get!”  She blushed more deeply at the double meaning of his words.  Realizing what he had said, he swore aloud.  Exasperated, he took a deep breath and tried again.  “I understand that we haven’t known each other for all that long and you know practically nothing about me.  I do, however, know that we’re drawn to each other.”

“Just hear me out,” he said, when she opened her mouth to protest.  “You can’t deny what you feel when we’re together any more than I can.  There’s a strong physical attraction there.  One which I would like to explore in more depth, every chance I get.”  This time his meaning was very clear.

Attempting unsuccessfully to keep the tremor from her voice, she replied, “I do like you, Will.  And you’re right; there is something physical between us.  But I’m not looking for physical; in fact, if I’m going to be completely honest, I’m not looking for anything.  I had a husband.  But he’s gone now and I have no intention of replacing him.”

“I’m not talking about meeting you at the altar, Carly.  I’m talking about getting to know you, and you getting to know me.  Giving this a chance.  Maybe we’ll find that we want nothing to do with each other.  Or maybe,” he said suggestively, “we’ll discover that we should never be apart.”  He released her arm and leaned back in the saddle, watching a myriad of emotions play across her face as she struggled to make sense of his words.

“Take me home, Will, please,” she pleaded.  “I don’t want to give you the wrong impression; have you think that I’m offering more than I am.  Maybe it would be best if we ended it here.”

“I have a better idea. Let me come courting.”

“What?” she asked, not certain that she had heard correctly.

“I want to court you, Carly.  Properly.  Sit with you in the moonlight; hold your hand.  Take you for a carriage ride.  Court the boys, too.  Play with them; take them fishing.  Give me a week.  One week.  Then if you still think that there can never be anything between us, I’ll leave.”

Alarmed at the thought of never seeing him again, she was also intrigued by his offer of courtship. The idea appealed to her, adding a modicum of respectability to their as yet undefined relationship.  Aware that he was waiting for her answer, she tossed her head and shrugged nonchalantly.  “If you’d like to come courting, I suppose that would be acceptable.”

“Yee haw!” he shouted, startling both her and the Palomino. Phil pranced sideways, pitching Carly back into Will’s firm torso.  He took the opportunity to hug her close to him and ignoring her protests, spurred the horse forward, heading back towards the ranch.

Jocie McKadehttps://www.jociemckade.com/
Her fiction writing has received the Author / Ambassador at Library Journal Self-e Authors, Winner Queen of the West Reader Favorite Award, Amazon Bestseller - Historical, Double finalist in the Next Generation Indie Book Awards in the Mystery and Humorous Categories. Writing humorous cozy mysteries and romantic comedy, Jocie can find humor in most everything, even when she shouldn't. She lives in the Midwest on Dust Bunny Farm with her family.
Previous articleIndependent Bookstore Spotlight – Literati in Ann Arbor, Michigan
Next articleSheila’s Book Review: Neuro-Linguistic Programming