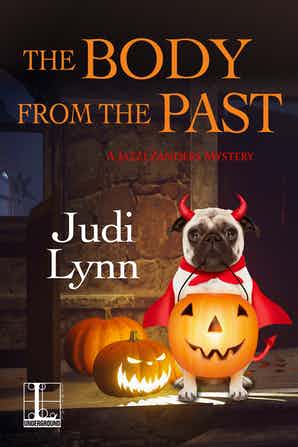 Jazzi, her cousin Jerod, and her husband Ansel are preparing to renovate a charming house that reminds her of an English manor. Before purchasing it, they had inspected the house for structural issues, but now when they do a more thorough walk-through, they discover a teenage girl’s bedroom that clearly hasn’t been touched in years. Dust covers the pink canopy bed, clothes still hang in the closet, and a hope chest remains full of journals and memorabilia. They’ve stumbled on a shrine to a dead girl.

They learn Jessica was killed in the middle of her high school graduation party. The murderer was never identified, but the brother-in-law of Jazzi’s friend, who went to school with Jessica, was suspected and never lived it down. He implores Jazzi to review the cold case and finally prove him innocent. Now it’s up to the house-flipper to nail a killer who will do anything to close the door on the past . . .

CLICK ON THIS LINK TO PURCHASE THE BODY FROM THE PAST 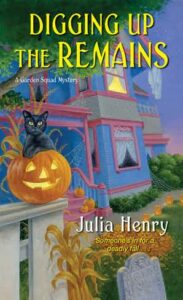 A festive fall is in full swing in Goosebush, Massachusetts, but when a snoopy reporter is felled by foul play, it’s up to Lilly and her Garden Squad to spook out a killer . . .

Between hosting a haunted house on her lawn, serving on the town’s 400th Anniversary Planning Committee, and prepping for the Fall Festival’s 10k fundraiser, Lilly’s hands are full. She doesn’t have time for prickly newspaper reporter Tyler Crane, who’s been creeping around town, looking for dirt on Goosebush’s most notable families . . . until he’s found dead on the race route moments before the start.

An unfortunate accident? Or did Tyler unearth a secret that someone in Goosebush is willing to kill to keep? By planting nasty rumors and cultivating fear, Tyler sowed a fair share of ill will during his brief time in town. Weeding through the suspects will be thorny, but Lilly and her Garden Squad are determined to root out the autumnal assassin before the Fall Festival flops . . .

CLICK ON THIS LINK TO PURCHASE DIGGING UP THE REMAINS 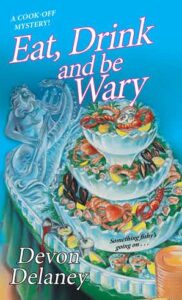 Eat, Drink and Be Wary — A Cook-Off Mystery #4 by Devon Delaney

The New England Fall Food Fest has begun, and for competitive cook Sherry Oliveri, it’s a chance to take home a prize—and take down a killer . . .

Sherry’s hoping her Savory Shrimp Lettuce Cups will impress the judges, and she’s invited her brother, Pep, to serve as her sous-chef. The good news is that she takes first place in her category, the bad news is that it’s easier to win when your toughest competition is dead . . .

After contestant Fitz Frye is found with a fishhook in his neck, Pep’s strange behavior doesn’t help his case when the police consider him top suspect. While Pep sits through a shakedown, Sherry searches near and far for the real culprit—before another deadly course is served . . .

CLICK ON THIS LINK TO PURCHASE EAT, DRINK AND BE WARY