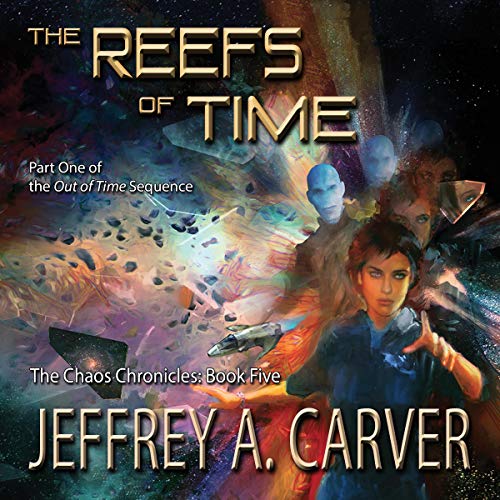 The new, two-part chapter in Jeffrey A. Carver’s THE CHAOS CHRONICLES:

The Reefs of Time (Volume 5) and Crucible of Time (Volume 6)—narrated by the Grammy, Audie, and Hugo-winning Stefan Rudnicki—will be out soon from Audible, iTunes, and other audiobook stores!

The Reefs of Time

The starstream is beautiful. But beauty turns deadly when an ancient AI bent on destruction uses it to travel uptime, to humanity’s future.

The Mindaru are dead. Or so exiled-Earthman John Bandicut and his alien companions believe, after their intervention to save the Orion Nebula and surrounding worlds. But now a part of this ancient and malicious AI colony is swarming toward the present from its birthplace deep in the past. Their opening: a temporal disturbance in the starstream, a hyperspatial thoroughfare used by myriad civilizations.

The disturbance emanates from the planetary defenses of nearby Karellia, whose people know nothing of the starstream or the galaxy-threatening Mindaru.

Only Bandicut and his friends have the knowledge and experience to act. But when several of the company go missing, he and Li-Jared must team with the pandimensional Ruall and her gokat—the oddest aliens Bandicut has met since the shadow-people—and journey to Karellia to find a way to cut off the timestream.

Meanwhile, on Shipworld, the “missing” Ik meets another human of Earth—a former lover of Bandicut’s—and embarks with her on a perilous mission far back into deep time, seeking a way to stop the Mindaru at their source.

The Crucible of Time

A galaxy in peril…

The story begun in The Reefs of Time continues. The time-tides caused by Karellia’s defenses have brought the malicious Mindaru AI out of the deep past into the present, threatening Bandicut and Li-Jared, who have arrived at the backwater planet – Li-Jared’s homeworld – to find it on the brink of interplanetary war. Somehow they must forge a peace between Karellia and its neighboring world if the Mindaru threat is to be broken.

Back on Shipworld, Ik and Julie Stone risk their lives a second time to stop the Mindaru at their source: a planet near the galactic core, a billion years in the past. Can Antares, the beautiful humanoid who also loves Bandicut, help them? What of Bria the gokat? And Amaduse, the most influential librarian in Shipworld?

And in the deep time of the galaxy’s early history, by the light of a million suns, the Mindaru do hideous things to an innocent species. The Mindaru plan for the altered creatures bears momentous possibilities even the deadly AI cannot predict.

Time is critical. Time is elastic. And time is running out. 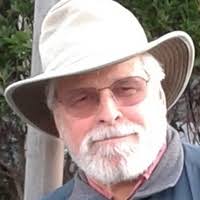 Jeffrey A. Carver is the author of numerous science fiction novels and stories, including The Chaos Chronicles series and the Nebula-nominated Eternity’s End. Though he’s an absolute junkie for science, his greatest loves in writing are character, story, and a healthy sense of wonder. He has taught writing all over New England, from Bread Loaf to MIT. He lives with his family in the Boston area. His website and blog are found at starrigger.net. This two-volume novel is Carver’s first new book in eleven years, and is a major addition to his collected works.