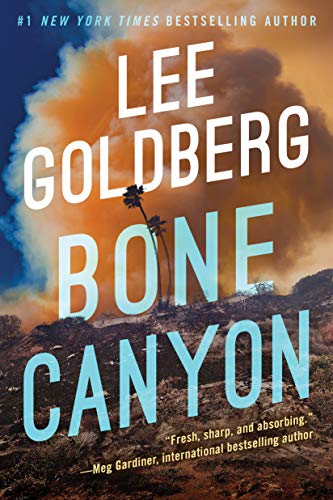 A catastrophic wildfire scorches the Santa Monica Mountains, exposing the charred remains of a woman who disappeared years ago. The investigation is assigned to Eve Ronin, the youngest homicide detective in the Los Angeles County Sheriff’s Department, a position that forces her to prove herself again and again. This time, though, she has much more to prove.

Bones don’t lie, and these have a horrific story to tell. Eve tirelessly digs into the past, unearthing dark secrets that reveal nothing about the case is as it seems. With almost no one she can trust, her relentless pursuit of justice for the forgotten dead could put Eve’s own life in peril.

ABOUT THE AUTHOR:
Lee Goldberg is a two-time Edgar Award and two-time Shamus Award nominee and the #1 New York Times bestselling author of more than thirty novels, including Washington Post bestsellers Killer Thriller and True Fiction, as well as King City, The Walk, fifteen Monk mysteries, and the internationally bestselling Fox & O’Hare books (The Heist, The Chase, The Job, The Scam, and The Pursuit) cowritten with Janet Evanovich. He has also written and/or produced scores of TV shows, including Diagnosis Murder, SeaQuest, Monk, and The Glades. And he co-created the hit Hallmark movie series Mystery 101. As an international television consultant, he has advised networks and studios in Canada, France, Germany, Spain, China, Sweden, and the Netherlands on the creation, writing, and production of episodic television series.