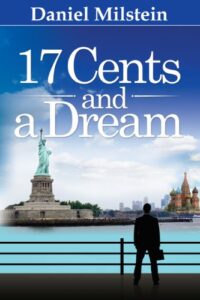 Daniel Milstein‘s 17 Cents & a Dream is a harrowing story about how his mother, father and brother escaped the oppressive government of the U.S.S.R and immigrated to Ann Arbor, Michigan has been described as the quintessential Jewish immigrant story of the era. Born in Kiev, Ukraine, Dan and his family experienced undue hardship, religious persecution and life-and-death situations all in the shadows of the greatest nuclear accident that ever occurred; the Chernobyl nuclear meltdown which killed more than 100,000 people including his grandfather. Non-fiction / BiographyRead Dan Milstein’s new book detailing his story: 17 Cents and a Dream: My Incredible Journey from the U.S.S.R. to Living the American Dream. Mark Victor Hansen, Bestselling Author of ‘Chicken Soup for the Soul’ who wrote the foreword says this: “Through pure determination, fortitude and attitude, Daniel pulled out of impossibly difficult situations. His story is true, his story is a personal inspiration to me and I hope it will inspire you too to maximize your potential and go for the greatest of dreams.”Available on Amazon