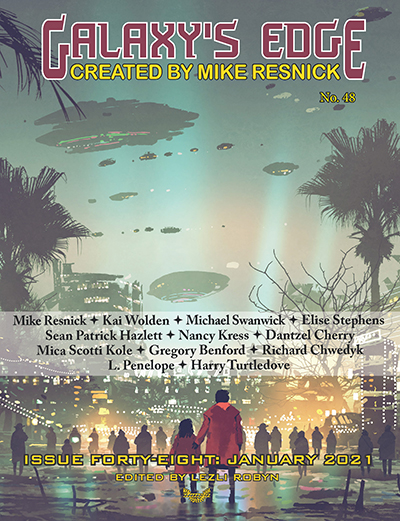 Galaxy’s Edge magazine and Dragon Con Announce a Star-Studded Slate of Judges for the Resnick Award.

Five final judges have been selected for The Mike Resnick Memorial Award for Short Fiction that encourages new writers in science fiction.

In December, Arc Manor (publishers of Galaxy’s Edge magazine) and Dragon Con initiated the Mike Resnick Memorial Award to continue Mike Resnick’s legacy of encouraging new science fiction writers. Stories submitted for the award that are selected for a final review will be judged by a slate of judges to determine the final ranking and winner of the competition.

The five judges include writers and professionals in the publishing industry.

Lois McMaster Bujold is one of the most acclaimed writers in her field, having won seven Hugo awards and three Nebula awards. She is the creator of the extremely popular Vorkosigan series of books.

Jody Lynn Nye is the author or co-author of over 50 novels and 100 short stories. Her collaborations include those with Robert Lynn Asprin for books in the MythAdventures series and The Ship Who series with Ann McCaffrey. Jody teaches the DragonCon Writer’s Workshop and was for five years the book reviewer for Galaxies Edge magazine.

Nancy Kress is known for her groundbreaking genetics themed novel Beggars in Spain, which many now consider to be a classic of the genre. She is also the winner of seven Nebula awards as well as many other awards, including the Hugo, the John W. Campbell, and the Theodore Sturgeon Memorial Award.

Sheree Renee Thomas is the current editor of The Magazine of Fantasy & Science Fiction. She is also a poet, writer, and anthology editor, and her two Dark Matter anthologies both won the World Fantasy Award. Dark Matter was also named a New York Times notable book of the year.

William B. Fawcett is an American writer, editor, anthologist, and game designer. He co-authored the official Mycroft Holmes Mysteries and over a dozen other novels. Bill has also written almost a dozen historical non-fiction books. He founded Mayfair Games and also designs board and computer games. Bill Fawcett & Associates has packaged and edited over 400 Science Fiction novels and two oral histories of the Navy SEALs.

There is no entry fee for the Mike Resnick Memorial Award for Short Fiction, and only professionally unpublished authors are eligible to enter the competition. The award will be announced annually at the Dragon Awards ceremony during Dragon Con. The winning story’s author will receive a trophy and a cash prize; in addition, the story will be bought by Galaxy’s Edge at their prevailing rates for publication in the magazine.

More information on the award may be obtained from:

More information on Galaxy’s Edge magazine may be obtained at:

ABOUT DRAGON CON: Dragon Con is the internationally known pop culture convention held each Labor Day in Atlanta. Organized for fans, Dragon Con features more than about 3,500 hours of comics, film, television, costuming, art, music, and gaming over four days. For more information, please visit www.dragoncon.org and follow us on Facebook and Twitter.