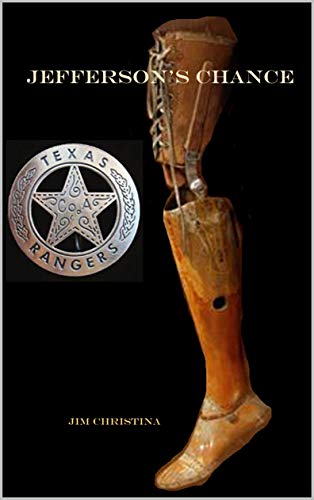 When a young man’s dream has always been to be a Texas Ranger, imagine his world falling around his shoulders when he is told because he has only one good leg and a wooden appendage, he does not qualify.

Now imagine an engineer offering to build a leg that functions just like a normal leg with no problems…now you have a story.

Jim Christina, author of many western novels, poetry and music has crafted a novel of such a young man and his trials and travails as a sworn Texas Ranger following in his father’s footsteps. The engineer is Thomas M. Griffith fresh from building the Brazos River Suspension Bridge and his new leg is key. Functioning like a normal leg, it gets Jefferson an appointment with the Texas Rangers and the code they lived by.

Crafted with humor, stalwart honesty and a running chase between renegade Comanches and two neer-do-wells, Jefferson’s Chance takes the reader from Austin Texas to the wilds of the Llano Estacado in Northern Texas. Pitting Jefferson and his new companion, Caleb Stringfeld, against a Comanche war chief named Mukwuroo and his friend, Pecos, both holdouts from Quanah’s surrender in 1874.

Climb aboard your mount and join Jefferson Greely, Caleb Stringfeld and Estevez Rialto in their search for two white captive children and Estevez’s daughter.

Jefferson’s Chance is available now through Amazon and all on-line book sellers along with from the author’s website, jimchristina.net in digital, paperback and hard bound editions.