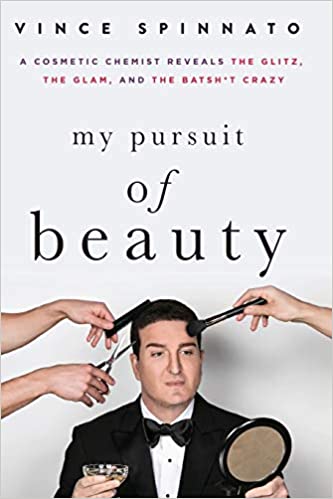 My Pursuit of Beauty: A Cosmetic Chemist Reveals the Glitz, the Glam, and the Batsh*t Crazy By Vince Spinnato

Beauty Comes from Within: Jars, Bottles and Tubes

At age 10, Vince Spinnato watched TV soaps with his grandmother and became enamored with the characters on The Young and the Restless who owned a cosmetics firm. He vowed he would follow in their footsteps one day and even chose a name—VS Vincenzo—a brand one of his companies still bears.

In his memoir, My Pursuit of Beauty: A Cosmetic Chemist Reveals The Glitz, The Glam and The Batsh*t Crazy, Spinnato shares the inner workings of the multi-billion-dollar beauty industry with entertaining tales about creating beauty products for megastars like Michael Jordan, Jennifer Lopez, Jessica Simpson, Lindsay Lohan, Gwen Stefani, Damone Roberts, and scores more.

He also shares some of his life’s most bizarre situations. There was the time he survived a tornado in Iowa while being tethered to a bridge, and another when he became stuck inside a resort water slide that involved melted butter and rescue by the fire department. Then there was his terrifying flight post 9/11 that was nearly shot down by fighter pilots.

Spinnato dealt with incessant bullying, body dysmorphia, trichotillomania* and multiple betrayals on the bumpy road from his grandmother’s couch in Vineland, New Jersey, to becoming a serial entrepreneur and expert in the beauty industry.

“A devastating breakup was the last straw,” he says. “At age 20, I got in my car, waved goodbye to New Jersey and headed to Hollywood, determined to launch my career.”

His modus operandi was to breeze into famous salons and announce that he would return in the morning to begin his internship. Once he felt he had both the expertise and the financial means, he founded TurnKey Beauty, Inc. specializing in the development of beauty and personal care products for celebrities under their own names, as well as brands for entrepreneurs and retail companies.

Spinnato has created more than 300 products for retail establishments like Banana Republic, Costco, Johnson & Johnson, Sephora, Victoria’s Secrets, Body Works and others. He recently launched a luxury skincare line, Caviar & Diamond, under his VS Vincenzo brand.

“To acknowledge those who helped me, I’m passing it forward by establishing two arts scholarships in my father’s and grandfather’s names, supporting Wells of Life, which provides clean water wells to villages in Uganda and volunteering at the Wounded Warriors Project with my comfort dog, Savannah,” Spinnato says. “To me, success means the financial ability to make a difference in the lives of others.”

He’s also developing a product line to help the approximately one to four-percent of the U.S. population who suffer from trichotillomania,* a hair-pulling disorder that Spinnato experiences.

*NOTE: Trichotillomania, also known as the “hair-pulling disorder,” is a type of impulse control disorder. Sufferers have an irresistible urge to pull out their hair from their scalp, eyelashes and eyebrows.

“‘Dynasty, ‘ produced by my dad, Aaron Spelling, sparked the imagination of my friend, Vince Spinnato, and inspired him to turn his dreams of developing luxury beauty products into a reality. His no-holds-barred memoir describing his struggles to the top is brutally honest, hilarious and heartbreaking. I couldn’t put the book down.” -Tori Spelling, actress/author of “sTori Telling”

“Vince’s honesty and his scientific talent about the skincare industry has made me love this book and his products. Growing up with the legendary iconic faces of MGM royalty like my mother, Judy Garland, I understand the trust you need to have in today’s confusing billion-dollar beauty industry. When you find the right ‘wizard’ you are grateful and stay connected.” -Lorna Luft, singer/actor, “The New York Times” bestselling author of “A Star is Born: The Film That Got Away” and five-time Emmy award-winning producer of the mini-series “Judy Garland: Me and My Shadow”

“As a beauty professional and founder of the largest ‘meeting and discussing’ book club in the world, I knew from the first chapter that this was from a perspective of creating ‘beauty’ that I had not read before. I flew through the pages. Five Diamonds in the Pulpwood Queen Recommended Reading list. This dazzling gem is the Official 2021 February Pulpwood Queen/Timber Guys Book of the Month Club Selection!” -Kathy L. Murphy, founder of International Pulpwood Queens and Timber Guys Book Reading Nation and author of “The Pulpwood Queen’s Tiara Wearing, Book Sharing Guide to Life” 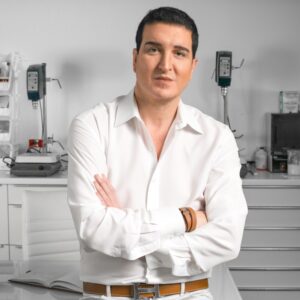 Most 10-year-old boys spend afternoons riding bikes and playing sports. Me? I sat on the couch snuggled close to my grandmother and watched “The Young and the Restless,” a popular TV soap opera. I was obsessed with the fictional Abbott family’s cosmetic business and vowed that I would one day own my own company. I even picked a name, VS Vincenzo, my name and initials in Italian, which remains one of my product lines today. Then along came that over-the-top night-time saga, “Dynasty,” and the obsession to become rich and famous reached a whole new level.

At age 20, I moved to Hollywood and incorporated TurnKey Beauty Inc. where I began developing skincare products for celebrities like Michael Jordan, Jennifer Lopez, Gwen Stefani, Jessica Simpson, Lindsay Lohan, French Montana, The Housewives of Orange County and many more. But I’m still waiting for the “rich and famous” part!

In true Vinny Spinnato fashion, I bumbled my way to success despite the people who promised moon dust and delivered muck. There were also the funny/tragic events like the time I accidentally spilled red wine and linguini all over Lauren Bacall’s designer white suit while we were lunching. Another time, I got stuck in a water slide that required melted butter, the fire department and a large dose of public humiliation. Not to mention the time post 9/11 that I flew on a commercial jet accompanied by fighter planes prepared to shoot us down.

There were also some wonderful people who helped me along the way, and I like to pass it forward. I’ve established two annual college scholarships for talented seniors in the arts at my former high school in Vineland, NJ. and recently donated a well to Wells of Life, a provider of clean water in Uganda. Dogs have always been a part of my life and my beautiful therapy dog, Savannah, and I work with the Wounded Warrior Project.

As the result of my bizarre life—including a lifelong struggle with Trichotillomania, a largely unrecognized psychological condition involving obsessive-compulsive hair-pulling—I spent years on the proverbial therapist’s couch. When I couldn’t stand to listen to myself another minute, I took my shrink’s advice and wrote a memoir: “My Pursuit of Beauty:  Cosmetic Chemist Reveals The Glitz, The Glam and the Batsh*t Crazy.”

I was thrilled when it was selected by Kathy L. Murphy as the 2021 February International Pulpwood Queen and Timber Guys Book of the Month, the largest meeting and discussing book club in the world with more than 800 U.S. chapters and 20 in foreign countries. Holy crap!