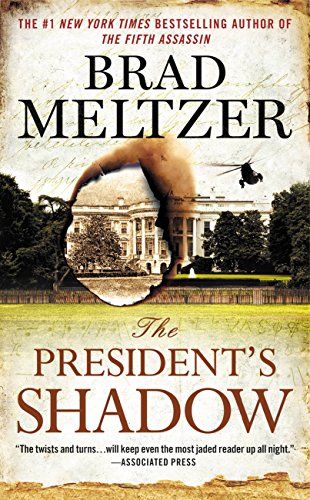 “THE PRESIDENT’S SHADOW” BY BRAD MELTZER

The members of the Culper Ring are getting mighty old, so their current leader, Tot, has recruited National Archives, in Washington DC, Archivist Beecher White to take control and rebuild the Ring to it’s former glory.

The First Lady is working in her garden when she unearths an arm.  In the hand of that dead severed arm is a flattened penny (like those you get at the fair) that points to Beecher’s Dad’s Army unit: The Plankholders.

Beecher is confused, but, agrees that the President is in danger since it is clear whoever put the arm in the garden was not seen, and that garden is right outside the White House.

With the help of the Culper Ring and his old friends from his hometown whose fathers were also Plankholders (coincidence?):

—and Clementine (Beecher’s first love whose father, Nico, is a recently escaped patient who is ready, and able, to kill the President)

Together, this team embarks on a mission to save the President (and, as it turns out, Beecher himself) that ends up being much more dangerous than any of them expected.  An old foe, the Knights of the Golden Circle, try to re-assert their dominance…..by murdering anyone who stands in their way.

To make matters worse……deception at the highest levels muddy the water for Beecher and friends.

“The President’s Shadow” is a fun, fast, thriller with very interesting historic details and places (See this link on Fort Jefferson).  Beecher is a reluctant nerdy hero.  Go Nerds!

Brad Meltzer is one of my first, and most favorite, author I have read. He rocks. Watch the video below. He is also very funny. 🙂