This is the sequel to the first part of the author’s memoir, The Little Eater of Bleeding Hearts. The first part goes from early childhood to about the age of seventeen when we leave the young man on the beach at Fortunes Rocks in Biddeford, Maine. The second part When the Flowers Are Gone covers the age of maturity, from seventeen on to the stages of full growth up to retirement from the university as Professor Emeritus. This part covers an entire panoply of activities, awards and involvement in teaching and social life. It includes the many travels and numerous participatory experiences in academic life including several courses that the author taught and devised such as “Transcultural Healing,” that was initially based on the concept of Hispanic curanderismo. Most of all, the author lists the many books that he conceived, both in English and in French, that were eventually published. This two-part refreshing of the many memories in the author’s life becomes his legacy both as a human being and teacher who struggled with the concept of success until he reached his goal as a full-fledged author and respected teacher. 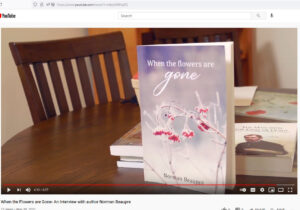 Five Things You Didn’t Know About Gangsters vs. Nazis by Michael Benson

1. The catalyst for the Gangsters vs Nazis battles in America during the Great Depression was an ex-Congressman and New York judge named Nathan David...