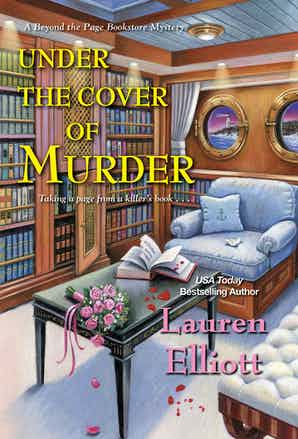 It promises to be Greyborne Harbor’s wedding of the year. The impending nuptials of Serena Chandler and Zach Ludlow will take place aboard his family’s luxurious super-yacht, currently moored in the harbor and the talk of the town. But on the day of the wedding, a man’s body washes up on the beach with no ID, only a torn page from a book in his pocket. As owner of Beyond the Page Books and Curios, bibliophile Addie is called in to identify the book, but she cannot.

The morning following the extravagant ceremony, a second body washes ashore and Addie has a sinking feeling that the two deaths are connected. While the guests are held on the yacht as the police investigate, at least Addie can peruse Zach’s father’s rare books library on board. A copy of Agatha Christie’s first Hercule Poirot novel, The Mysterious Affair at Styles, provides a clue that the killer may still be on the ship–but narrowing down the suspects without becoming the next victim may prove a truly Herculean task…

Available at these retailers 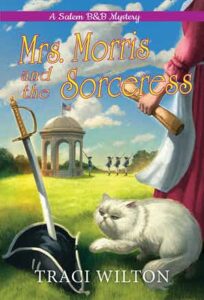 Mrs. Morris and the Sorceress — A Salem B&B Mystery #4
by Traci Wilton

It’s Fourth of July in Salem, Massachusetts, and B&B owner Charlene Morris is about to witness the shot heard ’round the town when a stunt goes wrong during a film production in the fourth Salem B&B Mystery from cozy writing team Traci Wilton.

Madison Boswell, a beauty recently transplanted from Boston, is starring in the Independence Day play in this New England town full of colonial history–and, of course, witchcraft. Madison may not be a Wiccan, but she does seem to have certain hypnotic powers. And she’s left some angry people in her wake, from a fellow actress beaten out for a role to a jealous betrayed wife. Now, as Charlene films the performance for her housemate, Jack–a handsome ghost who shares the Victorian bed-and-breakfast with her and her Persian cat–the drama queen takes a deadly bullet from what was supposed to be a prop gun.

With a long list of suspects and lots of backstage whispers, it looks like the investigation by Charlene and Detective Sam Holden could set off some fireworks… 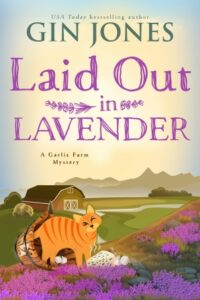 Mabel Skinner still hasn’t acquired a taste for growing garlic, but the app developer-turned farmer does have a nose for rooting out killers . . .

Mabel’s first clients are a retirement age couple celebrating their second chance at love in their later years. Hosting a rehearsal dinner with fresh foods seemed like a good idea to promote the farm—until the dead body of one of the wedding guests is discovered. The suddenly departed was the soon-to-be-ex-business partner of the groom, supposedly poisoned by goat cheese hors d’oeuvres provided by Mabel’s neighbor.

Despite the tragedy and the scandal, the groom insists on keeping his wedding date. But with the adult children from the couple’s previous marriages scheming to stop the new union, Mabel’s farm is reeking with suspects. And if she doesn’t uncover the murderer, her goat farming neighbor will get sent to the pen for life . . .

“Growing garlic might be my newest obsession thanks to Six Cloves Under!”
—Lynn Cahoon, New York Times bestselling author of the Farm-to-Fork mystery series 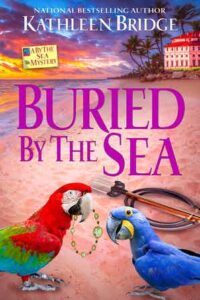 At her family’s hotel on a Florida barrier island, sleuthing novelist Liz Holt is shocked by a hidden treasure—and a buried body . . .

A team of archaeologists is staying at Indialantic by the Sea to study the days of the Spanish explorers, and they’ve stumbled upon a stunning and valuable find at the dig site, but before they can unearth it one of the archeologists finds himself buried in the sand and pierced with diving spear tipped with poison.

The local sheriff’s department accuses the owner of the neighboring property, Liz’s elderly reclusive friend and naturalist, Birdman, of the crime. Liz is sure—well, pretty sure—he is innocent and sets her sights on the remaining four archeologists.

With the help of her PI boyfriend and an octogenarian hotel resident, and two mischievous pet parrots, Liz must dig into the mystery of who buried the scientist and absconded with the artifacts he’d promised would put him in Florida history books—before she becomes history herself . . . 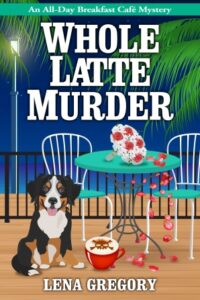 Ex-New Yorker and local diner owner Gia Morelli is still getting used to the sweltering Florida sun. But this summer she’ll have to deal with a more dangerous kind of heat—when she’s hot on the trail of another murderer . . .

Summer in Boggy Creek has arrived, and Gia’s best friend, successful real estate agent Savannah, is getting hitched. Now she’s enlisted Gia’s sleuthing talents in a desperate search for the perfect wedding dress. But when Savannah mysteriously vanishes after showing a mansion to a bigwig client, Gia investigates the house Savannah was trying to sell. The first clue she finds is Savannah’s car in the driveway. Inside the house, they stumble on Savannah’s potential buyer—dead. Someone had apparently closed the deal—with a two by four full of nails to the client’s head. Soon afterward, a woman’s body is fished from the lake near the same house. The townsfolk are now sweating bullets over the murders, and the heat comes down on poor Gia to find her missing friend, and track down the killer . . .