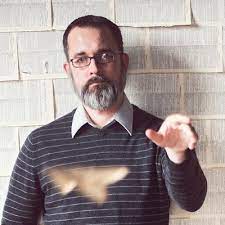 Welcome Shawn! Thank you so much for joining us today on Reader’s Entertainment.

First, tell our readers a bit about yourself. Where you’re from, where you live? Is writing your full-time job?

I grew up in Lancaster, PA, which is where I now live with my wife and our six kids. My family has lived here for 13 generations—it’s a special place to me. I do write full-time, and split my days between co-writing memoirs and writing my own novels.

Ever since I was a kid. My first story was called Fortunately, Unfortunately, a small picture book I wrote in 2nd grade. I’ve been writing for a living since 2010.

I wake up around 6:00 every morning with our two youngest kids, then make breakfast and get everyone off to school. At about 8:30, Maile takes over and I start writing, normally getting emails and other things out of the way so that I can spend the late morning and early afternoon writing.

What inspired your newest book, The Weight of Memory?

If you have read my first book, The Day the Angels Fell, you’ll recognize a cameo by Samuel and Abra about three-fourths of the way into this new book. It was fun crossing paths with them again!

There’s a scene at the end of The Weight of Memory that took me a long time to get right—the timing had to be perfect, and I was really banking on it being an emotional pay-off for the reader. I hope it works for people.

The character Dan in my book These Nameless Things was so uncooperative! He was tough to write because he was regaining his memory as the story went along, so sometimes it was difficult for me to keep his knowledge in check.

Definitely Abra on her quest to find the Tree of Life. She was the star in my YA book, The Edge of Over There.

All writers are readers. Are there any particular authors that have influenced you?

Neil Gaiman’s ability to mix reality and otherworldly elements has been an inspiration. I love Marilynne Robinson’s use of narrative voice. And I love the story-telling abilities of William Kent Kreuger.

The Brothers K by David James Duncan is an absolutely work of art that so few people I know have read.

I have a secret almost-talent…does that count? I started playing the harmonica a long time ago but lost the habit.

Being stressed out about life makes it hard for me to be creative.

Here’s a look at Shawn’s latest release: THE WEIGHT OF MEMORY 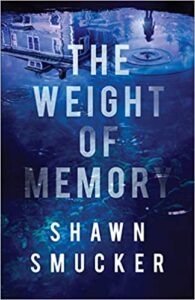 When Paul Elias receives a terminal diagnosis, he leaves his physician’s office in a fog. Only one thing is clear to him: if he is going to die, he must find someone to watch over his granddaughter, Pearl, who has been in his charge since her drug-addicted father disappeared. Paul decides to take her back to Nysa—both the place where he grew up and the place where he lost his beloved wife under strange circumstances forty years earlier.

But when he picks up Pearl from school, the little girl already seems to know of his plans, claiming a woman told her.

In Nysa, Paul reconnects with an old friend but is not prepared for the onslaught of memory. And when Pearl starts vanishing at night and returning with increasingly bizarre tales, Paul begins to question her sanity, his own views on death, and the nature of reality itself.

In this suspenseful and introspective story from award-winning author Shawn Smucker, the past and the present mingle like opposing breezes, teasing out the truth about life, death, and sacrifice.

YOU CAN PURCHASE THE WEIGHT OF MEMORY AT:
BAKER PUBLISHING
AMAZON

To learn more about Shawn and his books head to: