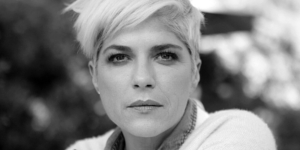 Next April, Alfred A. Knopf will publish MEAN BABY by Selma Blair, a memoir about her childhood, her career as an actress and model, her struggles with addiction, the traumas she endured, her diagnosis and life with multiple sclerosis (and advocacy for others living with MS), and the joy and solace she found in becoming a parent. The book will be published in hardcover and eBook by Knopf. Penguin Random House Audio will publish an audiobook edition of MEAN BABY, narrated by the author. The announcement was made by Reagan Arthur, Executive Vice President and Publisher of Knopf. The book has been edited by Jennifer Jackson, Vice President and Executive Editor, who acquired the book from Brettne Bloom and Julie Barer at The Book Group.

Blair has been a reader and writer her entire life, a keeper of diaries, and a devoted archivist of her own work. The title MEAN BABY comes from the earliest story Blair recalls hearing about herself: that she was a disagreeable child with a terrible disposition and a troubling habit of biting her sisters. Subtitled “A Memoir of Growing Up,” the book recounts a childhood spent in worship of her mother, an adolescence of love and pain, her destructive ways of coping with an illness she did not know she had, her life as a model and muse, her struggles and successes in Hollywood, and her battle with depression as a young mother. These are surprising accounts from the author, never before shared. Blair also writes about finding stability and happiness in her life, and in doing so, provides readers who may be struggling in their own lives with a measure of hope.

“MEAN BABY is one of the most honest, resonant, and empathetic portraits of an artist, daughter, mother, and addict that I’ve ever read,” said Jenny Jackson. “From the first pages of her proposal, I felt certain that her writing belonged on our list. What I did not realize, until the day Selma delivered the final manuscript, was how her passion for literature, her love of Didion and Carver and Plath, would be interwoven in the text. The result is a raw, searching, deeply humane memoir, and a gorgeously wrought story of a fearless woman.”

Blair is best known for her roles in Legally Blonde, Cruel Intentions, The Sweetest Thing, and Hellboy. She is also the subject of Introducing, Selma Blair, a documentary directed by Rachel Fleit, about Selma’s life with Multiple Sclerosis, which was released earlier this month to extraordinary acclaim. In 2017, Blair was named a Person of the Year by Time Magazine for her courageous contributions as a Silence Breaker.