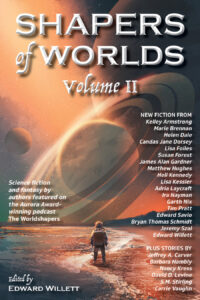 For the second year in a row, Shadowpaw Press (www.shadowpawpress.com) has produced an anthology of science fiction and fantasy stories that includes works from multiple bestselling and award-winning authors from around the world.

All of the authors were guests during the second year of Willett’s Aurora Award-winning podcast, The Worldshapers (www.theworldshapers.com). Among them are winners of and nominees for most of the world’s most prestigious awards for science fiction and fantasy literature.

Like the “cabinets of curiosities” created by collectors of the sixteenth century, Shapers of Worlds Volume II displays a varied array of thought-provoking delights: tales of humour and sorrow, darkness and light, and hope and despair that are full of adventure, full of life, and sometimes full of regret. There are stories set in alternate histories, in possible futures near and far, and in the here-and-now, taking place on Earth, on distant planets, or in fantastic realms. All arise from the innate need of human beings to create, to imagine . . . to shape worlds.

Willett is himself an award-winning author of more than sixty books of fantasy, science fiction, and non-fiction for readers of all ages, including eleven novels for New York’s DAW Books. His twelfth novel for DAW, the humorous space opera The Tangled Stars, will be out in 2022. His most recent release is the young adult outer-space adventure Star Song (Shadowpaw Press). In The Worldshapers podcast, Willett, a former newspaper reporter and editor and radio and television host, chats with other science fiction or fantasy authors about their creative process.