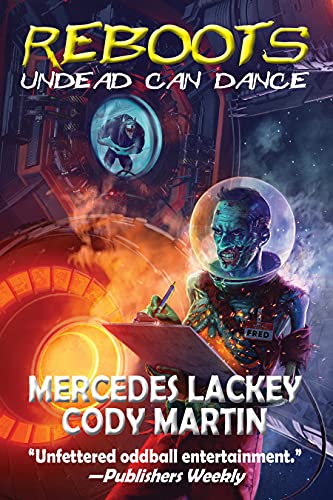 Say hello to Humph the Boggart, the principled, down-on-his-luck private detective, Skinny Jim the zombie, and Fred the werewolf, in this film noir style space opera.

MERCEDES LACKEY:
Just named as the 2021 SFWA Grandmaster, Mercedes Lackey is the acclaimed author of over fifty novels and many works of short fiction. In her “spare” time she creates jewelry and is a licensed wild bird rehabilitator. Mercedes lives in Oklahoma with her husband and frequent collaborator, artist Larry Dixon, and their flock of parrots.

More information about Mercedes can be found at:  Mercedes Lackey

CODY MARTIN:
Born in Phoenix, Arizona, Cody has been living in SW Florida since the mid-90’s. Thus far, he has avoided death by mosquitos, sun poisoning, and Florida drivers, among other things. When he’s not dodging premature death, he occupies his time playing with swords, guns, climbing on tall things, and chained to his computer as a journeyman writer. He has written ten novels, all with his mentor Mercedes Lackey. These include the Secret World Chronicle braided novel series, two entries for SERRAted Edge, an entry for the Exiled Series, and two previous entries in the Reboots series.