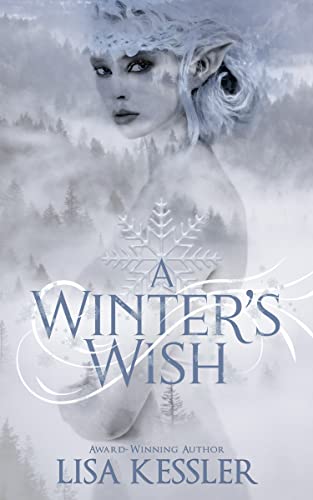 A Winter’s Wish By Lisa Kessler

Darren, a down but not yet out, music writer, is struggling to make a living through his passion. He wins my heart by wishing not to have his music make him rich and famous, though it would be nice, but that it will mean something to someone. That it will be heard by people beyond the mostly empty bars his performs in and the few commercial jingles he’s sold.

Abriette is an elf warrior of the winter realm. For some time magic has been fading, along with their race. Children are no longer being born, intimacy is not necessary beyond a physical act, living façade of their role hiding the concern of their race vanishing.
When the strength of a wish carries it across the veil, bringing hope in a long ago prophecy. Abriette is charged with crossing the veil into the human world and bringing the blood of the Wisher back to restore the magic and save Winter Realm.

Abriette enters the human world at Christmas time, every one is wishing. Finding the one Wisher she needs to find feels like looking for a needle in a haystack! Most of those wishing seem to gather around the Santa to give their wishes and Brie being an elf, through various circumstances ends up working with the Mall Santa…you guessed it, Darren. Hey a man’s gotta eat and pay rent.

The two are attracted to each other. A trust builds, a connection between them forms over Guinness. (Both of them won me over right there!)

Darren, because of his upbringing and the physical and magical happenings goung on right in front of him, has no issue believing she’s an Elf. She has no issue letting him know, who would believe him. I really enjoyed the banter between them and elf humor!

As days go by, Brie’s façade fades and she is truly herself with him, not just the warrior. Darren wants to help her find the Wisher but it feels like an impossible quest…both wishing the prophecy could have been a bit more specific. And Brie is also becoming hesitant about taking the blood of an innocent as the way to save her people. The steamy moments between them grow into something new, an intimacy, instead of just a way to scratch an itch.

Darren’s emotions, awakened by Brie, inspires him to pour these feelings about her and their situation, not wanting her to leave, into the music and lyrics as he writes. He realizes what he’s been missing.

They both realize they love each other at the same moment all is revealed to them. Each scrambling to sacrifice, to save the other, willing to pay with their lives. Twists, turns, and lump in throat climax as love tries to works its magic on both sides of the veil…and you must read to see how it all turns out!

Lisa Kessler has a gift to deliver amazing worlds! This is a light hearted and complete story in Novella length with characters who’s conflicts stir the emotions and have you routing for a Happily Ever After!