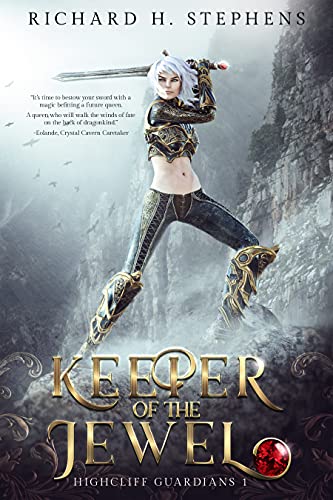 KEEPER OF THE JEWEL — Highcliff Guardians Series Book One
A series within the Soul Forge Universe
A new series release for fantasy author and podcaster, Richard H. Stephens

Something evil lurks beneath the palace.

A phantasm from a darker past makes its presence known to Khae Wys, Queen of the Elves.

Braving the perils of a haunted tower, the queen seeks the counsel of the mysterious Fae, for only they can predict what is to come. A future that doesn’t bode well for her only living child.

In a desperate attempt to save the heir to the Willow Throne, Princess Ouderling is exiled to the only place capable of protecting her. Highcliff, the home of the coveted Crystal Cavern and the dragons that watch over it.

The Duke of Grim, however, has other plans for the princess.

ABOUT THE AUTHOR:
Born in Simcoe, Ontario, in 1965, I was raised and still reside in Cambridge, Ontario. I began writing circa 1974, a bored child looking for something to while away the long, summertime days. My penchant for reading, ‘The Hardy Boys,’ led to an inspiration one sweltering summer afternoon, when my best friend and I thought, ‘We could write one of those.’ And so, I did.

​As my reading horizons broadened, so did my writing. ‘Star Wars’ inspired me to write a 600-page novel about outer space that caught the attention of a special teacher, Mr. Woodley, who encouraged me to keep on writing.

A trip to a local book store saw the proprietor introduce me to Stephen R. Donaldson and Terry Brooks. My writing life was forever changed.

At 17, I left high school to join the working world to support my first son. For the next twenty-two years I worked as a shipper at a local bakery. At the age of 36, I went back to high school to complete my education. After graduating with honors at the age of thirty-nine, I became a member of our local Police Service, and worked for 12 years in the provincial court system.

​In early 2017, I resigned from the Police Service to pursue my love of writing full-time. With the help and support of my lovely wife Caroline and our 5 children, I have now realized my boyhood dream.  More information about Richard can be found at: Award-winning Fantasy Author | Richard H. Stephens (richardhstephens.com)